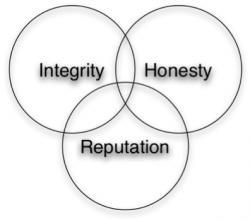 In our search to find the truth and to separate fact from fiction as it relates to William Branham and his ministry, one of the the most important issues that has to be addressed is his credibility. This need to be examined in relation to the various stories he tells in describing his supernatural experiences.

Credibility refers to the believability, trustworthiness and reliability of a person.

Because William Branham was a minister of the Gospel, one starts off with the assumption that he generally told the truth, that he was credible. But that assumption must be discarded if it can be demonstrated that he regularly strayed from telling the truth.

William Branham portrayed himself as a simple, honest, uneducated man who was sent from God as a prophet to forerun the second coming of Christ. However, many of the stories that he told have been proven to be untrue and many of the doctrines that he said he received directly from God were, in fact, plagiarized from other ministers. Another significant issue is that many of William Branham's stories changed dramatically over time. Why did this happen?

The following items have caused us to question William Branham's credibility (click on the links to read a detailed explanation of the issue):

We have had many message ministers deflect the issue of William Branham's credibility by pointing to the flaws of some of the prophets in the Old Testament. Such a response is clearly coming out of Cognitive Dissonance (if you don't know what this is, please click on the link).

The problem with this argument is that it is a red herring.

Why did Abraham lie? Because he feared that his life was in danger.

William Branham, on the other hand, appeared to have lied to uphold the claim that God spoke to him and that his prophesies were authentic. William Branham lied to make himself look like a prophet so that people would follow him.

Under the new covenant as outlined in the New Testament, lying is not acceptable behaviour because the Bible plainly tells us what is expected of Christian leaders:

Therefore an overseer must be above reproach...[1]

For the overseer must be blameless as one entrusted with God’s work...[3]

Now we know that the law is good, if one uses it lawfully, understanding this, that the law is not laid down for the just but for the lawless and disobedient, for the ungodly and sinners, for the unholy and profane, for those who strike their fathers and mothers, for murderers, the sexually immoral, men who practice homosexuality, enslavers, liars, perjurers, and whatever else is contrary to sound doctrine, 11 in accordance with the gospel of the glory of the blessed God with which I have been entrusted.[4]

Also, because many of William Branham's prophecies failed, we must also deal with Deuteronomy 18:20-22.