Is Joseph Branham a prophet? 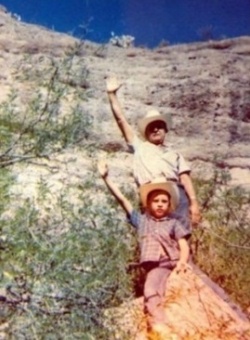 William Branham took his son Joseph up to Rattlesnake Mesa for this overexposed photograph, after he realized that Joseph was not present when he heard a blast. Joseph should have been there at the time based on The Vision of Angels in Arizona.

Did William Branham prophesy that his son, Joseph, would be a prophet?

The dedication of Joseph Branham

At the dedication of his son, Joseph, William Branham prayed the following prayer:

In a little closet, way yonder in the north lands You promised this child to me. Father, may Your blessings rest upon Him. Joseph, my boy, I give you to God, and may your life be a blessing. May you be a prophet, Joseph; may God's grace rest on you. May the God of your father, the Lord Jesus Christ ever bless you and make your life a blessing to others. In Jesus Christ's Name I bless this child. Amen.[1]

There is no prophecy contained in this prayer. It is simply a request by a father that God would allow his son to be a prophet. It should be noted that by this emphasis, William Branham clearly believes that the prophet is the highest office in the church.

Somehow, when I was in our church. Many of you sprinkle them in baptism, infant baptism; that's all right. We try to follow the Bible. Jesus picked up little children and blessed them. We dedicate them. And in dedication of the little boy at the altar, somehow, I was inspired to say, "Joseph, thou art God's prophet." And maybe when I leave, I pray that a double portion of the Spirit will come upon Joseph for the age to come, if there is one.[2]

William Branham's stories often differed radically from the truth and this is another perfect example of this.