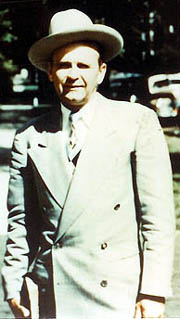 Who was William Marrion Branham? In the late 1940's, his healing ministry skyrocketed him from a pastor in a small church outside Louisville, Kentucky to an international evangelist. However, as his ministry progressed his visions and doctrine became increasingly controversial until his death on December 24, 1965.

William Marrion Branham was an evangelist who has been called the "pacesetter of the healing revival" [1] and a "prophet"[2]. He was born in rural Kentucky, raised in Indiana, and in the 1940’s his healing ministry skyrocketed him from a rural pastor to an international evangelist.

Views on William Branham's legacy can be grouped into the following main categories:

By his own admission, William Branham was prone to exaggeration and he often embellished his stories.