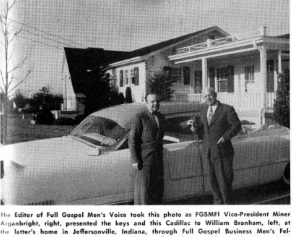 William Branham accepts the keys to a free Cadillac in front of his free house.

William Branham protrayed himself as growing up dirt poor and never having much money in his life. As late as 1962, William Branham complained that he didn't have enough money to cover the expenses of his meetings.

He clearly portrayed a picture of himself as never having had much money.

But is this true?

When William Branham was about 17 years of age in 1926, he purchased a new Model T Ford. The price of this car, assuming that it was not special ordered, would have been somewhere between $366 - $580, depending on the exact model. This was not an insignificant amount of money in 1926 and certainly a lot of money for a 17 year old boy.

Why did William Branham indicate that he was poor as a young man?

In 1956, the U.S. Internal Revenue Service ("IRS") charged William Branham with tax evasion. Although he protested his innocence, he eventually settled the charges by paying a fine of $40,000 in 1962. This fine would be equivalent to paying a fine of almost $350,000 in 2021 dollars.

William Branham's estimated net worth in 1965

Sarah Branham published a letter in 1989 stating that her father, William Branham, had control of cash and liquid assets of $3,244,321 at the time of his death.

$3,244,321 USD in 1965 would equal approximately $30,518,349 USD in 2022 equivalent dollars. That would be enough wealth to put William Branham in the category of ultra-high-net-worth individual according to Money.com.

In 1989, Sarah Branham had an open letter to all message believers printed and distributed. The text of this open letter is as follows:

The following is the text of a letter from Raymond M. Jackson to Billy Paul Branham concerning Sarah Branham De Corado:

I remember our first experience here, we were very, very poor. That's the reason today that I, my choice... And I--I say this with reverence. My choice is to be a poor man. I could've been a multi-millionaire if I had wanted to be. One person brought me a check, FBI agent, for a million, five hundred thousand dollars, a bank draft, and I refused to look at it from the Mission Bell Winery in California.[3]

And I--what little money I get a hold of, why, I put it in foreign missions, all we don't just have to eat on, and we--we live poor. Come to my home and find out, or let the investigation find out anything you want to know. I come poor; I will return poor. My people are poor, and I--I'll desire to remain that way.[4]

Oh, how everything was gone. I stood upon the hill up there when the baby laying on the mother's arms... I heard the preacher say, "Ashes to ashes and dust to dust." They buried my heart. When I seen that young wife of twenty-two years old, been married a little over two years. Holding little old Billy on my arms, and him looking, "Mama, mama," reaching for her, and his little sister laying on the mother's arms... An old turtledove set in the bush a cooing. I heard the clods drop. We were poor, had to bury her almost in a potter's field.[5]

And I said, "Well, value!" I said, "Could you..." I remember years ago when I got my first little T-model Ford. I was a sinner. About 1926... And I would just shine that little thing all day Sunday to make it shine, stay home, didn't go to church, and shined it. Now, what if today I tried to find one piece of that car? It's gone. You couldn't do it. It's finished.[6]

I'm a poor man. I haven't got no capital. And I go along. I've never took an offering in all my life, never did, just what people freely send me. Then I take that and hold it together, what I can, and then, as soon as I get enough built up, I take right off to the heathens and preach the Gospel with it, so... I'll have to answer for your tithing, the people that give it to me.[7]

Looky here today, what they're going on now. Hollering at me about spending some money out yonder for Christians, and wanting to give me twenty years in the state prison for spending money to operate a religious move. And whiskey and beer and cigarettes write off tens of millions of dollars a year to corrupt the nation. And me trying to preach righteousness, standing in the door of Jesus Christ, and send me to the penitentiary for it. And take stuff like that of the evil, lowdown, smart, intelligence, and let them write it off for television programs which corrupted the world, sent women to the dogs. One of the greatest curses the nation's ever had, and they get by with it. They send me to penitentiary for preaching the Gospel taking a few dollars out here to--to preach the Gospel, that people give me to preach the Gospel with. I'm not rich, and I can't write that out. But yet they want to send me to the penitentiary, hold me two years, and got a trial coming soon. Oh, how lowdown, how filthy. God, be merciful.[8]

All expenses was made. You had to sponsor that. You had to pay for it. Wish I could've just paid for it myself, but I--I can't do that. I can't afford it; I haven't got money like that. And I... The reason I can come to small meetings, as I have explained...Now, there's some of our brethren, such as Brother Roberts, and many of those men, who have great business, and they have radio and television, and so forth, that they've got to make so many thousands of dollars every day to sponsor that. See? They have to have it.[9]

Why, these cars that we got today, couldn't run over these highways we used to have. My first trip west, it taken me sixteen days to go from Jeffersonville to Phoenix, Arizona, eighteen hundred miles. But, my, the most of--it was 1926, they had nothing but just old rock roads. I was a little boy setting there, holding this spool-top Ford; I thought I was making good time. Would took a horse two or three months to do it, if my daddy would've come.[10]

Out into the land where this Message is going, from the East Coast to the West, from California to New York, down into the South, up into the North, out into the missions, and wherever It's going, and in this tabernacle. We are poor. We don't have these great, big, flowerly things, and television casts. We're just trying to do the best we can.[11]