William Branham claimed he saw a series of eight or nine prophetic visions in June 1933. In the second prophecy, William Branham witnessed Benito Mussolini brutally invading Ethiopia and then coming to a shameful demise.

The initial telling of the Mussolini prophecy

The first recorded version of this prophecy was on March 26, 1953, when William Branham stated:

When I said that Mussolini, when he first come in power twenty-some-odd years ago, I said, "If Mussolini ever goes towards Ethiopia, mark this down, there'll never be peace till Jesus Christ comes."[1]

The dictator that's now arising in Italy (which is Mussolini), he will come into power, and he will go to Ethiopia; and Ethiopia will fall at his steps." There's people setting here now that knows that there's a group of people come and stood...was going to throw me out of the hall for saying such a thing...when I said that. But did he do it? But I said, "He'll come to a shameful end," and he did. Him and the woman he run with was turned upside down and hung on a rope in the street with their feet up, their clothes hanging down. All right, that come to pass. [2]

There are significant problems with this prophecy as detailed below.

The initial prophecy is not really a prophecy

IF Mussolini ever goes towards Ethiopia... (emphasis added)

Starting a statement with "if" is hardly prophetic. However, given that Mussolini did invade Ethopia, we now have a clear prophecy:

According to the New York Times:

War is defined as an active conflict that has claimed more than 1,000 lives.

So given that there are normally wars going on somewhere in the world most of the time, how is this a prophecy? Isn't William Branham just couching his "prophecy" in a way that reflects what the Bible has already said?

And you will hear of wars and rumors of wars. See that you are not alarmed, for this must take place, but the end is not yet. For nation will rise against nation, and kingdom against kingdom, and there will be famines and earthquakes in various places. 8 All these are but the beginning of the birth pains.[4]

'And when you hear of wars and rumors of wars, do not be alarmed. This must take place, but the end is not yet. 8 For nation will rise against nation, and kingdom against kingdom. There will be earthquakes in various places; there will be famines. These are but the beginning of the birth pains.[5]

We must conclude therefore, that the original Mussolini prophecy by William Branham was not a prophecy at all.

Incorrect Statements as part of the Prophecy

William Branham often included incorrect statements as part of this prophecy, such as:

1) Ethiopia would be Mussolini’s first invasion, and his last invasion:

However, Mussolini became Prime Minister of Italy in October 1922, and was already a dictator by 1925.

How can a prophecy be true, yet contain multiple incorrect statements? While the truth can sometimes be found in a lie, can a lie be found in the truth?

Progressive Changes In The Prophecy

William Branham said repeatedly that the prophecies he received in 1933 were written down:

I've got it wrote, old yellow paper still waiting in a Bible. I saw the end time coming.[7]

Yeah, I know that, see, just exactly what's wrote on my book of prophecy in 1933, that would take place.[8]

But if this is the case, then why is it so difficult to ascertain exactly what the prophecy was? The problem is that William Branham slowly changed it over the years.

The problem with all of these changes is that William Branham said on November 17, 1963 that the vision was "perfectly on the dot. And it's never failed, and it won't fail, because it's THUS SAITH THE LORD."

The first recorded mention of this prophecy is in 1953. William Branham also refers to this and other prophecies being contained in his book of prophecies, but no copies of this book appear to be in existence, or were ever released to the public.[24]

It is our understanding that Voice of God Recordings has indicated that the book of prophecies have (conveniently?) been lost.

About Ethiopia and the Italian Invasion 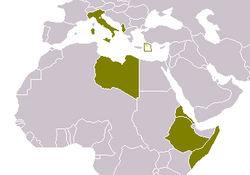 A man named Frumentius, once a slave in Ethiopia, returned as a missionary and baptized King Ezana, who declared Ethiopia a Christian nation in 340 A.D.[25] Ethiopia developed in relative isolation from European Christianity until 1508 A.D., when Portugal and Ethiopia established diplomatic relations. By 1624 the Portugese influence resulted in the conversion of Emperor Susenyos to Roman Catholicism. However all Europeans, Jesuits, and Catholic converts were expelled in 1632 by Susenyos' son, Emperor Fasilides, who had read of the Jesuits' bloody inquisitions in other nations.

Mussolini is reported as issueing the following commands to his soldiers:

On April 27, 1945, Mussolini and his mistress, Clara Petacci, were caught by Italian communist partisans near the village of Dongo (Lake Como) while attempting to escape into Switzerland before the Allied armies reached Milan.

On April 28, Mussolini, his mistress, and their fifteen-man train (mostly ministers and officials of the Italian Social Republic) were taken to the small village of Giulino di Mezzegra, and shot.

The next day the bodies of Mussolini and his mistress were found hanging upside down on meat hooks in Piazzale Loreto (Milan). The corpse of the former leader became subject to ridicule and abuse by many.