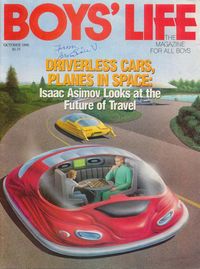 Boy’s Life Magazine – October 1990. This cover is an adaptation of an advertisement that appeared in Newsweek Magazine on December 17, 1956.

William Branham told about a vision he experienced in June 1933 which contained a number of prophecies which he wrote down on an "old paper". One of the things that William Branham prophecied was that cars would become more egg-shaped as time moved on and that science would ultimately produce a driverless vehicle.

But there are significant problems with this prophecy:

Was this the source of William Branham's 1958 driverless car prophecy?

The May 14, 1958 episode of the Disneyland TV series titled "Magic Highway USA" examined the future of transportation, including the future of driverless vehicles, complete with a game of checkers. This was over 3 months prior to the September 27, 1958 sermon in which William Branham first mentions his "prophecy" of the driverless car.

Please watch carefully from 3:11 to 4:37 of the following video and decided for yourself. Was this simply a coincidence or is this another clear example of plagiarism? 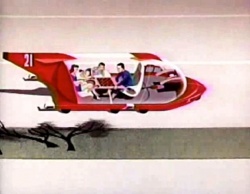 The driverless car imagined by Disney in 1958

BIG problems with the prophecy

In the Laodicean Church Age book, William Branham says, “Now let me say this. Can anyone prove any of those visions wrong? Were they not all fulfilled?” Almost 70 years after 1933, we now have the benefit of hindsight in our ability to confirm the accuracy of these prophecies.

Of his "vision" of driverless cars, William Branham said that in his vision, in the future, you would:

Just set your dial like this—like you dial your phone—your car takes you right on to it, can't wreck nor nothing.[1]

If this was a vision of the future, why would anyone be DIALING on a phone?

Changes in the prophecy over time

William Branham stated that the 1933 prophecies were all written down. However, this book mysteriously disappeared after his death. Why was this allowed to happen? Was it intentionally lost? Did it ever exist? 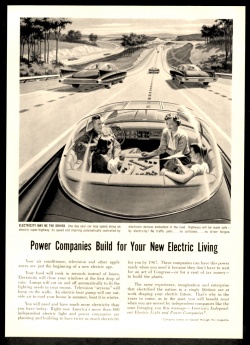 Because the prophecies were written down, each retelling should have been consistent through the years. However, this is not the case as initially this prophecy is only about egg-shaped cars (1953 - 1957). After this, the cars are remote-controlled (1958) with a glass roof and no steering wheel, with a family inside (1960) playing cards or checkers. The bumpers had sensors and the car was controlled by radar and magnets (1961). Finally, in the Church Age Book (CAB), the car has a plastic bubble-top.

Why did William Branham first mention the driverless car only after the appearance of the 1956 advertisement in Newsweek (which also appeared in many other newspapers and magazines) and the Disney TV show featuring driverless cars in 1958? If the prophecy really foresaw the future, why weren't the people watching DVD's, sending email on their iphones or playing games on their handheld gaming device? In reality, William Branham appears to have simply copied this "prophecy" from the popular press. 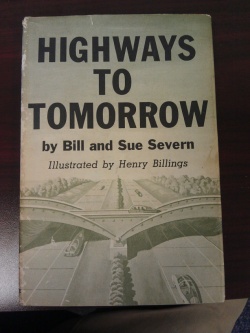 When the Central Power and Light Company ran an advertisement entitled "Power Companies Build For Your New Electric Living,” Branham's telling of this vision now included details of the people sitting inside of the car. His description closely matched the scene from the article, from the rounded glass dome of the vehicle to the family playing a board game in the cab while leaving the steering wheel unattended.

Again, Branham claimed that his vision had been fulfilled. This time, however, it was fulfilled by the driverless car. That same car was on exhibit in the 1962 World's Fair Century 21 Exposition, in Seattle, Washington. Branham toured the exhibits, and described the car as fulfillment of prophecy.

But like the egg-shaped Zephyr, this technology has not become mainstream. Followers of William Branham gather great excitement when they read of any advancement in the automotive industry, hoping that these vehicles will someday become common. Printed in newspapers, it was already common discussion by an excited nation.

"Republished in magazines and newspapers, these designs of Bel Geddes's "prophetic imagination," one historian noted, "struck a responsive chord in a public anxiously looking toward the better environment that was promised by an enlightened technology" Page 158, Stage Designers in Early Twentieth-Century America

With the progression of science, one can raise many questions surrounding this prophesy describing an egg-shaped car. Why are cars no longer in the shape of the Lincoln Zephyr? Why would God show a vision of a family playing a board game, when modern families are more likely to be entertained by a DVD, Blu-Ray, Xbox 360 or Playstation? Why did Branham claim prophetic insight regarding something that he saw at a World's Fair and in a magazine, as well as newspaper ads?

If this was a legitimate prophecy, a vision of the future, why were the people in the driverless car playing checkers? Shouldn't they have been playing a game on a screen? Angry Birds, perhaps? In another couple of years, everyone will be wearing virtual reality headsets.

Believe it or not, the steering wheel was invented after the car. The first automobile (the Benz Patent-Motorwagen) appeared in 1886, and was guided by a steering tiller. The steering wheel did not make an appearance until 1894.

Timing of the prophecy's fulfillment 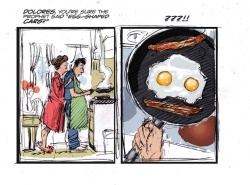 William Branham said in 1964 that this prophecy was already fulfilled, and that companies were taking orders for driverless trucks already that they could control from headquarters. He also considered the Volkswagen a “perfect egg”. Time has proven that this prophecy was nowhere near fulfilled in 1964. William Branham also admits reading articles and a TV show about driverless cars at around the same time that he expands the vision from egg-shaped to driverless cars.

Driverless vehicles in the media

With driver assist technologies being integrated into vehicles today, the promise of a fully autonomous individual vehicle on all or designated roadways is possible. The main problem is responsibility for liability. 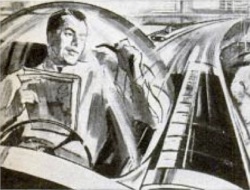 Driverless technology for automobiles has been a technological dream since cars were first invented (see drawing from 1918).

A driverless car (controlled by radio) was first mentioned in Popular Science magazine in its November 1925 issue. Driverless vehicles were revisited in the magazine on a repeated basis since then. (http://www.popsci.com/)

The Milwaukee Sentinel described tests being made with driverless car technology in an article titled "'Phantom Auto' will tour city" in their December 8, 1926 edition.

Driverless cars were described by David H. Keller in the “The Living Machine” published in Wonder Stories in 1935.

At the New York World’s Fair in 1939, General Motors Futurama exhibit, “Highways & Horizons” pavilion contained audio-equipped chairs in which visitors rode for a third of a mile through the 35,738 square foot scale model of an imagined world of 1960, complete with automated highways with driverless vehicles.

In the 1950's, autonomous cars represented the modern life of luxury that was just around the corner and were seen in popular media throughout the 50's and 60's. Disney also imagined a world of self-driving cars, with a heavy emphasis on leisure. The May 14, 1958 episode of the Disneyland TV series titled "Magic Highway USA" examined the future of transportation, including the future of driverless vehicles, complete with a game of checkers.

Bill and Sue Severn published a book which detailed their vision of driverless car technology entitled "Highways to Tomorrow" in 1958.

The egg-shape design always seems sensational, but from its introduction in 1942 has never made its way into mass-production. The design is not aerodynamic (an egg is designed to exit a chicken's body, not to be thrown), has the potential to crack in the wrong places during a collusion, an does not support fast acceleration.

As cars have been purposed more for slow traffic in major cities, they have actually become more boxy as this provides more room for the occupants of the vehicle.

A Cadbury Creme Egg is a chocolate product produced in the shape of an egg. The product consists of a thick milk chocolate shell, housing a white and yellow fondant filling which mimics the albumen and yolk of a real egg.

Cadbury created the "Creme Egg Car" which, as the name suggest, is an ovular vehicles painted to look like Creme Eggs. They are driven to various places to advertise the eggs, but are based mainly at the Cadbury factory in Bournville. Five "Creme Egg Cars" were built from Bedford Rascal chassis. The mirrors are taken from a Citroën 2CV.

Retrieved from "http://en.believethesign.com/index.php?title=Driverless_Cars&oldid=23996"
Categories:
This page was last edited on 13 December 2019, at 17:21.
Content is available under Creative Commons Attribution unless otherwise noted.
Privacy policy
About BelieveTheSign
Disclaimers
Mobile view