William Branham told about a series of eight prophetic visions he experienced in June 1933. In the sixth vision, William Branham saw women cutting their hair, acting and dressing like men, and finally almost completely abandoning their garments. | 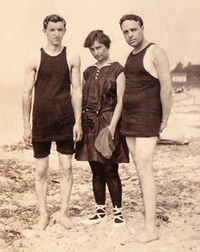 Male and female swimsuits in the United States, circa 1916.

The fifth vision had to do with the moral problem of our age, centering mostly around women. God showed me that women began to be out of their place with the granting of the vote. Then they cut off their hair, which signified that they were no longer under the authority of a man but insisted on either equal rights, or in most cases, more than equal rights. She adopted men's clothing and went into a state of undress, until the last picture I saw was a woman naked except for a little fig leaf type apron. With this vision I saw the terrible perversion and moral plight of the whole world. (Church Age Book, Chapter 9, by William Branham)

William Branham mentions that these visions that he received in 1933 were “Thus Saith the Lord”. The prophecy was written down, so each retelling of it should have been consistent. However, William Branham only mentions this part of the 1933 vision in 1964, when he refers to an article published in Life Magazine that included a photograph of a woman in a transparent gown.

The morals of the human race have never been that great, and Americans are no different. The fig-leaf analogy is sensational, but people have been wearing immoral clothing of this type since, well, Adam and Eve. The bikini itself was invented by fashion designer Jacques Heim in Paris in 1946, and was popularized in America long before William Branham mentioned the immorality of American clothing as part of the 1933 prophecy. Furthermore, images of partially-clad and naked women can be found in much ancient art, such as Egyptian art.

Changes in the story

The Church Age Book includes "women cutting their hair" as part of this prophecy - which is absent from the recorded sermons.

William Branham preached against women voting, driving, and cutting their hair. However, his daughters did all of these things. In fact, William and Meda Branham even began trimming their daughter Rebekah's hair before she was old enough to ask for it.

Doesn't it matter how you raise your children, especially if you have a catastrophic word from the Lord?