Fulfillment of Prayer for Great Men of the World 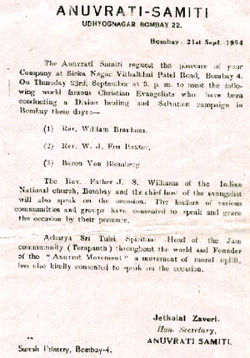 Invitation to meet religious leaders in India. However, William Branham did not pray for these men but invited them to attend his meeting.

In 1951, William Branham stated that an Angel spoke to him in May 1946 with the following commission:

Do not fear, I am sent from the presence of the Almighty God to tell you that your peculiar birth and misunderstood life has been to indicate that you are to take a gift of Divine healing to the peoples of the world. If you will be sincere when you pray and can get the people to believe you, nothing shall stand before your prayer, not even cancer. You will go into many parts of the earth and will pray for kings, monarchs, potentates, and great men of the world. You will preach to multitudes the world over and thousands will come to you for counsel. You must tell them that their thoughts speak louder in heaven than their words. [1]

There is no indication that William Branham ever met a king, monarch or similar ruler. He may have met a few elected officials but none of them would be considered "great".

We believe this to be a failed prophecy.

There is no public record of this.

There is no public record of this. The only source for this is William Branham who said, "I've been in Hollywood, and I prayed for King George in the palace, and Gustav up in Sweden." (April 12, 1963, Sermon: God in Simplicity).

There is no public record of this. Owen Jorgensen wrote that this happened in Egypt, although Farouk was deposed (no longer a King) and exiled at the time of William Branham's visit to Egypt.

Finland: 20,000 based on reports in A Man Sent from God, by Gordon Lindsay

Mexico: 25,000 based on the biography, Supernatural: The Life of William Branham by Owen Jorgensen.

South Africa, based on reports in A Prophet Visits South Africa, by Julius Stadsklev. These services were held in a racetrack, as no venue was large enough in Durban to hold all of these people in a single building.

India: The meetings in India all took place in a church building. As most sports coliseums hold between 25,000 - 50,000 people at a time, it is impassible that even 20,000 people would fit into one church, even if it had a balcony. William Branham said, And the mayor himself told me that there was five hundred thousand people in the city, had come for the healing services, for the meetings. (February 20, 1955, The Second Coming) So while many people did attend those services, the logistics of the venue make it impossible for even 100,000 to have attended one service.

William Branham once said he baptized 500 people while 10,000 people watched while the newspaper only reported that 14 people were converted in a tent meeting. Based on his reputation for exaggeration, and the fact that that most of the meeting numbers were self-reported, it is very likely that less people came than were reported.

Portions of the crowds that gathered in East London, Durban City Hall, Bloemfontein, and Cape Town, South Africa. Lots of people did came in the 1950's, but he was banned from preaching here in the 1960's despite a THUS SAITH THE LORD prophecy that 300,000 would attend a single meeting in Africa.

According to William Branham, he met the following people:

There is no public record of this meeting. The only source for this is William Branham who said, I was entertained there by, well, the celebrity, that's true, from Mr. Nehru, and the president, and the parliament and all of them. I got their tickets and things, right here in my pocket, their little cards, and so forth. They were nice. Couldn't be any nicer. (October 3, 1954, India Trip Report)

There is no public record of this meeting. It appears that William Branham attended a prayer breakfast with a number of other people that the president attended. It is not known whether they ever talked or were introduced. William Branham said, I had the privilege of eating breakfast not long ago with Vice President Nixon. (June 18, 1958, Sermon: Handwriting on the Wall)