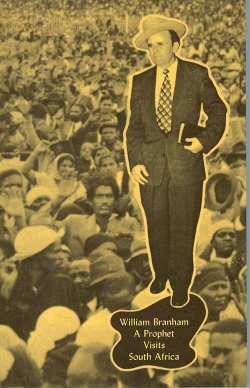 The book "William Branham, A Prophet Visits South Africa", written by Julius Stadsklev, contains many photographs, first-hand testimonies, and newspaper reports on William Branham's meetings in South Africa in 1951. This book can be found through various retail sites on the internet. A sample of first-hand testimonies found in this book are listed below.

Unfortunately, this book could also be described as a "hagiography" which is defined as:

It should also be noted that these meetings were not a fulfillment of William Branham's vision of later meetings in South Africa. That specific vision was related publicly in 1952 for the first time and was never subsequently fulfilled (i.e. the vision failed).

The non-European section of the Durban congregation.

On the last day of the campaign approximately 45,000 Indians, Africans, and Europeans gathered together for the afternoon service on the Race Course. Long before the meeting began the streets were closed and thousands were left outside in the streets.

...One of the astonishing features of the campaigns was the mass healings. Brother Branham often exhorted the people to lay their hands on each other in the mighty name of Jesus and claim deliverance for those who were bodily afflicted. His impassioned prayers which followed deeply moved the people to faith in God. They were instantly healed of different diseases and afflictions - the deaf heard, the lame walked and the blind saw. Amazing!

I had suffered from asthma for twenty-four years, since the age of three. But I praise and thank the Lord that he did not only heal me physically but also spiritually.

My healing took place the first night of Brother Branham's visit. My faith was so strengthened that I was healed without the Brother praying for me. The Spirit of the Lord was so mighty among us that all I had to do was to ask.

The last night of the Branham campaign I asked the Lord to have Brother Branham say something to me. He did. He said that I had suffered from asthma and that the Lord had healed me. I rejoice now in the Lord and promise to serve Him to the end.

I had been suffering from epilepsy for fifteen years. I had been to specialists. Finally I was sent to Port Alfred to be at the coast and was also never without tablets which I had to take regularly. I always had the fear that I was going to collapse in the street or at work, which quite often happened, and I was afraid to be left alone.

While I was sitting among hundreds of others, Brother Branham pointed to be and I felt as if a magnet were drawing me. It was a wonderful feeling and I just wanted to jump and shout, "Praise the Lord," as I knew at once that I was healed. When Brother Branham said, "The lady with the white hat-a dark shadow comes over you; you are suffering from epilepsy." As I nodded my head and raised my hand, he said, "Praise the Lord, you are healed." Oh, what a wonderful feeling.

For thirteen years I could not hear at all but I do praise the Lord that He healed me completely. I can hear the faintest whisper now. Praise God for His wonderful touch.

Healed of an injured spine

I received my healing on the 11th of October, 1951. I had been ill exactly one year...Brother Branham told me that I had gotten hurt a year ago and told me exactly how I felt. He told me he knew I had strong faith and that God would heal me. I was healed instantaneously.

One year before I received my healing I slipped on a smooth polished cement floor in our kitchen, and broke a small bone at the lower end of the spinal cord. The effects were I could only get up on my feet with great difficulty after sitting or lying down, I had much pain in my back for most of the time, and it was awkward in school for I could not sit or stand up for any length of time. ...We had prepared for a dangerous operation of the spine...I have X-ray films showing the broken bone.

A Durban woman who had been bedridden for the past 10 months, rose up from a camp bed in the Durban City Hall last night where she had been taken to hear the American evangelist, the Rev. William Branham, and declared: "I feel as if I were two years old."

The Rev. Mr. Branham after a succession of people had come on to the stage to receive God's blessing suddenly turned to Mrs. J.A. Naude of Blythsood Road and said: "You, Madam, have been suffering from internal trouble, but you are now cured - get up off that bed."

Mrs. Naude immediately rose to her feet, swayed a little and then walked to the end of the bed where her husband and daughter looked on in amazement. Mr. Naude told a "Mercury" reporter that he had had a succession of doctors attending to his wife and they had told him that nothing could be done for her. He had spent his savings trying to make her well.

...When a "Mercury" reporter called yesterday, he found Mrs. Naude arranging flowers, while her daughter, nine-year-old Anne, watched, delighted at her mother's return to health.

The Port Elizabeth campaign was conducted from November 7th through the 11th. At first the meetings were held in the Feather Market Hall but were later moved to the Davis Stadium. Here again the crowds were the largest ever seen in the city of Port Elizabeth. One evening Brother Branham pointed out an elderly man who was lying on a cot. He told him, "The Lord will heal you. You can now get up, fold your blanket and your cot and walk."

The elderly man got up and started folding his blanket when several Red Cross men, who were always assisting at the meetings and ready to help the sick, came over to assist him. He spoke loudly and emphatically as he said, "Brother Branham told me to fold my blanket and my cot and that doesn't mean that you're supposed to help me. So go away and don't bother me."

Retrieved from "http://en.believethesign.com/index.php?title=A_Prophet_Visits_South_Africa,_by_Julius_Stadsklev&oldid=23814"
Categories:
This page was last edited on 20 April 2019, at 01:12.
Content is available under Creative Commons Attribution unless otherwise noted.
Privacy policy
About BelieveTheSign
Disclaimers
Mobile view