This article is one in a series of studies on the doctrines of William Branham that pointed to himself - you are currently on the article that is in bold:

William Branham taught that discernment (the revealing of people's hearts) was the "Sign of the Messiah". He used the example of Jesus talking to the woman at the well, and then showed how he (William Branham) also possessed this sign as proof that he was a prophet. 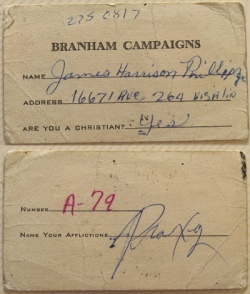 Did Jesus use prayer cards?

William Branham used prayer cards. On them was printed the card number and space for four questions:

When you listen to the tapes of discernment, these are the only questions that William Branham is discerning. In other words, he is publicly discerning information that these individuals had shared with the Branham Campaigns in private before they came up to the platform.

Many people came to Jesus asking for a sign. He replied:

An evil and adulterous generation seeketh after a sign; (Matthew 12:39)

A wicked and adulterous generation seeketh after a sign (Matthew 16:4)

And he sighed deeply in his spirit, and saith, Why doth this generation seek after a sign? (Mark 8:12)

The Samaritan woman who met Jesus at the well ran into town yelling "Come, see a man, which told me all things that ever I did: is not this the Christ?" (John 4:29). While this woman was actively looking for a sign that the Messiah had come, she was part of an adulterous generation.

The only sign that Jesus was the Messiah, was his death and resurrection:

Then answered the Jews and said unto him, What sign shewest thou unto us, seeing that thou doest these things? Jesus answered and said unto them, Destroy this temple, and in three days I will raise it up. (John 2:18-19)

and there shall no sign be given it, but the sign of Jonas the prophet. For as Jonas was a sign unto the Ninevites, so shall also the Son of man be to this generation. (Luke 11:29b-30)

and there shall no sign be given unto it, but the sign of the prophet Jonas. And he left them, and departed. (Matthew 16:4)

There shall no sign be given unto this generation. (Mark 8:12b)

Perhaps William Branham did have the gift of discernment, but he certainly did not have the gift of resurrection. No matter how long they delayed his funeral and memorial service, he did not resurrect. The truth is that Jesus himself pointed only to the coming resurrection as the sign that Messiah had come.

What Old Testament Prophecy tells of the Messiah revealing the hearts?

There are no prophecies in the Old Testament that claim that the Messiah would have the gift of discernment. Instead, the prophecies about Jesus tell of his resurrection, pain, and sinless life:

Did Jesus have the gift of discernment?

And others, tempting him, sought of him a sign from heaven. But he, knowing their thoughts, said unto them, Every kingdom divided against itself is brought to desolation; and a house divided against a house falleth. (Luke 11:15b-16)

Now are we sure that thou knowest all things, and needest not that any man should ask thee: by this we believe that thou camest forth from God. (John 16:30)

The woman said to Him, “I know that Messiah is coming” (who is called Christ). “When He comes, He will tell us all things.” (John 4)

So at best, William Branham knew in part. At worst, he made stuff up and passed it off as truth. One example of a significant lack of discernment in William Branham's life is his choice of disciples. In fact, many of the ministers and associates he chose ended up displaying significant lack of morals. While Jesus' disciples gave their life for the Good News (apart from Judas - who only hurt Jesus), people such as Jim Jones, Paulaseer Lowrie, Roger Rudin, Paul Cain, Gene Goad, Leo Mercer and Fred Sothmann spread fear, lies, perversion, and idolatry throughout the world.

The troubling doctrine of Christ Branham

William Branham claimed that he had the gift of discernment, and that discernment was the "Sign of the Messiah". Some claim this made him a prophet, but others logically conclude that this doctrine makes William Branham the Messiah. In claiming that discernment was the ‘sign of the Messiah’, William Branham taught that he alone possessed this sign for the Gentiles — the first and only person besides Jesus Christ! He became the messiah to the Gentiles in his own mind and the mind of his followers (if he had not come, the world would be cursed, right?). This is why Pastors like Donny Reagan preach that leaving the Message is the unpardonable sin, even if the person that leaves the Message remains a Christian. They deny the power of salvation through Jesus Christ in exchange for salvation through William Branham.

If you believe that discernment is the sign of the Messiah, you can only believe one of two things with regards to William Branham:

For false messiahs and false prophets will appear and perform great signs and wonders to deceive, if possible, even the elect.[1]

Notice. She said, "Well, I perceive that Thou art a Prophet." She said... Now, watch close. She said, "We know that Messiah cometh, and when He comes, these signs will be with Him. But being that You're a Prophet, You must be a Prophet to have these Messiahic signs."

...and He went about and showed these kinds of signs, told Peter who he was and went through, and discerned the thoughts of the mind, and told the woman... And that was the sign of the Messiah.[3]

Now, Jesus had come just exactly the way that He--they said--the Bible said He would come. And He did just exactly what the Bible said He would do. And yet, they did not believe Him. He performed the Messiahic sign and showed them that He was the Messiah (in the very same chapter), and they called Him a Beelzebub, a devil, because He was able to discern their thoughts. And they thought that He was a devil.[4]

The church thinks today, "Oh, there was a great historical Christ. He--He healed the sick. He could discern the thoughts of their heart. He was a historical Christ. He came to the multitudes. He came to Peter, and He said to Peter, his name was Simon, said, 'Your name is Simon; your father's name was Jonas.' Oh sure, that was Jesus did that. That was the sign of the Messiah according to the Scriptures, what the prophet said."[5]

What was the sign of the Messiah? Who knows what the Messiah sign was to be? A prophet (Is that right?), a discerner of thoughts and foretell. All Jews believe that He was a--the Messiah should be a--a forthteller, He would--He would know what was, and what would be, and what has been; that was the sign. All... God said, "If there be one among you who is spiritual or a prophet, I the Lord will make Myself known to him, speak to him in dreams and in visions. And if what he says comes to pass, then fear that prophet, for I'm with him. But if it doesn't, then don't you hear him; don't fear him at all 'cause I'm not with him." Well, that's just only sense.[6]

"And I seen a man stand up on the platform, and by the power of discernment tell people who they were, and out in the meetings, and what was wrong. And just the way the Bible said Jesus done it, to show the sign of the Messiah.[7]

Notice. When He came, He made Hisself known to the Jews by being a Messiah, by showing that He was the prophet that Moses rose up, or that Moses spoke of, rather, that He was the Messiah, because He did the sign of the Messiah. And they knew that was Messiah. He perceived their thoughts. That's the Word, sharper than a two-edged sword, a discerner of the thoughts of the heart. Is that right? And He was the Word, and here He is, discerning their thoughts.[8]

He cared so much till when a woman, living with six man, identified and knowed and recognized His Messiahic sign of discernment, He cared enough till He forgive every sin and give her waters that she didn't come there to draw, because she recognized. She said, "Sir, I perceive that You are a prophet," when He told her what was wrong with her. And they, she was looking for that day to come, only she had been all church grouped, she didn't have a chance to do it. But when she seen a Man Who could tell her what was wrong with her, she said, "Sir, I perceive that Thou art a Prophet. I know when the Messiah cometh He'll do these things."[9]

And being that I've told you all these nights, and tonight, that He is not dead; He is here, and promised to do the same thing. And promised that there would come a time in the last days, according to Malachi 4 and according to Saint Luke, that He would appear again in human form among His people and do the same things, and reveal the same thing, the same Messianic sign. How many knows that, you Bible readers, knows that's the Truth? Say, "Amen." [Congregation says, "Amen."--Ed.] Must all be Bible readers.[11]