Where did William Branham say he got his revelation from?

William Branham said this about his "revelation" of the first seal:

I would've had a horrible mistake on that if it hadn't been about twelve o'clock today when the Holy Spirit came in the room and corrected me on something that I was writing down to say. I was taking it from an old context. I had nothing on it. I don't know what the Second Seal is no more than nothing, but I'd got some old contexts of something that I'd spoke on several years ago and wrote it down, and I'd gathered this context—context…

And Dr. Smith, many great outstanding teachers that I—I'd gathered, and all of them believed that, so I'd wrote it down. And I was fixing to say, "Well, now I'll study it from that standpoint." And there about twelve o'clock in the day the Holy Spirit just swept right down into the room, and the whole thing just opened up to me, and there it was…?… of this—of this First Seal being opened.

I'm as positive as I'm standing here tonight that this is the Gospel Truth that I'm going to tell you about. I just know it is. Because if a revelation's contrary to the Word, then it isn't revelation. And you know, there's some of the stuff can look so absolutely true, and yet isn't truth. See? It looks like it is, but it isn't. [1]

He didn't get it from reading books:

I have read every book on it I could find. And with a…I…The last time that I was—was tried to go through it, just teaching it, about thirty years ago, I took the book... Somebody had told me that the Adventists had more light on the second Coming of Christ than any people that they knowed, so I found some of their good books, to read it. I got Smith’s book on Daniel, of revelations. And he said this white horse that went forth was white, and it symbolized a conqueror. And in this conquering... Many of you Adventist brethren here knows the book, and many of you others, also, by reading it. And—and others, I read two or three. I read, and I can’t call…There’s two more books I read, and both man agreed that that was right. [Brother Branham knocks on the pulpit five times—Ed.] That was fine teachers, supposed to be some of the best, with the best light.

So I thought, “Well, if I don’t know, I’ll just say what they said, try to teach it that way.” They give a very good exclamation of it, what it really meant. And they said, “Now, here is a white horse, and a white horse is a power, a charger.” And said, “The man that sit on that, was the—the white horse, was the Holy Spirit that went forth in the early age and conquered that age for the Kingdom of God. He had a bow in his hand, which meant, like Cupid, he shot the arrows of love into the hearts of the people, the love of God, and he conquered.”

Now, that sounds very good, but it isn’t the Truth. No, sir. Yeah. It wasn’t. White does mean righteous. We—we realize that. The white means righteous. The teachers taught it, that it was the Holy Spirit conquering in the first age; but my revelation, by the Holy Spirit, is not that way.[2]

From the First Seal:

A white-horse rider went out.” See? Who is he? He is mighty in his conquering power. He is a great fellow in his conquering power. You want me to tell you who he is? He is the antichrist. Exactly what he is. Now, because, you see, if an antichrist; Jesus said, that, “The two would be so close together until it would deceive the very Elected (the Bride) if it was possible.” Antichrist, it’s the antichrist spirit. Remember, in the church ages, when we opened the first church age back there, we found out that the Holy Spirit was against a certain thing they got started in that church age, and that was called “the deeds of the Nicolaitanes.” You remember it? Nikao means “to conquer.” Laity means “the church,” the laity. Nico-laitane, “to conquer the laity.” “Take the Holy Spirit out of the church and give It all to one holy man. Let him be the boss of all of it.” You’ve went through it, see, Nicolaitane. Notice, Nicolaitane was “a—a saying,” in one church. It become “a doctrine,” in the next church age. And in the third church age, it was “a forcement,” and they had the Nicaea Council. And it was then made a—a doctrine in a church. And what was the first thing happened? An organization from it! Now, is that right?[3]

Comparison to the teachings of Charles Taze Russell 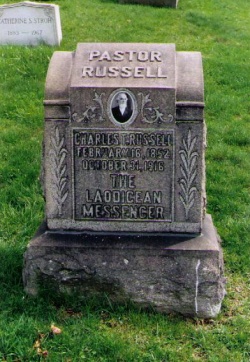 Now, I have many fine Jehovah Witness friends sitting here, that’s all…or have been. Maybe some of them is still Jehovah Witness. But they’ve always applied, Mr. Russell did, this hundred and forty-four thousand, to being the supernatural Bride of Christ. See? They…It’s not. It has nothing to do in the church age, at all. They’re absolutely Israel.[4]

William Branham used Clarence Larkin’s interpretation of the fifth and sixth seals. But he primarily used Charles Taze Russell’s interpretation for the other five seals and used some of Clarence Larkin's teaching to fill in. While William Branham gladly pointed out that he disagreed with Russel’s interpretation of the 144,000, he failed to explain to his listeners that he was heavily relying on Russell’s teachings for the seals. Why did he omit that fact? Russel’s teachings on the 144,000 are in the same chapter as his teachings on the seals. Surely he read the entire chapter.

Compare William Branham's teaching on the First Seal above to what Charles Taze Russel said in the 1918 book, The Finished Mystery:

And behold a white horse.—The doctrines, teachings of the Lord and the Apostles recognized as the one and only rule of faith and practice of God's Church.
And he that sat on him.—The Bishop of Rome, the embryo Pope, the personal representative of Satan.
Was given unto him.—“Under the reign of Constantine (who murdered his own son in the same year in which he convened the Council of Nice) the opposition of the empire to Christianity gave way to favor, and the Imperial Pontifex Maximus became the patron of the professed but really apostate Church of Christ...[5]

Comparison to the teachings of Clarence Larkin

In addition to Charles Taze Russell, William Branham also borrowed a few things from Clarence Larkin in the First Seal sermon as detailed below. Why does he mention Dr. Smith but not Russell or Larkin? All of William Branham's quotes in the table below are from the First Seal and the Larkin quotes are from his book, The Book of Revelation published in 1919:

The Four Living Creatures or Beasts

William Branham stated his view of the four living creatures:

And Matthew, Mark, Luke, and John, those Gospels are standing there guarding That. The wisdom of a man; the power of a lion; the work of an ox; and the swiftness of the leopard…or the eagle, rather. Yes, the Gospels standing there![8]

In the early Church, it was thought that the figures in Ezekiel 1 and Revelation 4:7 represented he four Evangelists:

We can't determine exactly where William Branham copied this but it is clear that he did, because this view dates back to the Ante-Nicene Fathers.

Moving to the Next Seal

Click here to go to the next article - The Second Seal

He spoke to me, and said, “The Seven Seals will be opened. The seven mysteries, sevenfold mystery of the Bible, that’s been closed up since the foundation of the world, will be revealed. (William Branham, 65-0418M - It Is The Rising Of The Sun, para. 12)

William Branham told his followers that his revelation came directly from God. This is clear from a comment he made on March 18, 1963 in his sermon on the First Seal:

I would've had a horrible mistake on that if it hadn't been about twelve o'clock today when the Holy Spirit came in the room and corrected me on something that I was writing down to say. I was taking it from an old context. I had nothing on it. I don't know what the Second Seal is no more than nothing, but I'd got some old contexts of something that I'd spoke on several years ago and wrote it down, and I'd gathered this context — context…

And Dr. Smith, many great outstanding teachers that I—I'd gathered, and all of them believed that, so I'd wrote it down. And I was fixing to say, "Well, now I'll study it from that standpoint." And there about twelve o'clock in the day the Holy Spirit just swept right down into the room, and the whole thing just opened up to me, and there it was…?… of this—of this First Seal being opened. (63-0318 - The First Seal, Para.36)

William Branham admitted that he was widely read on the subject and he definitely gives the impression that there was no one prior to him who had the revelation God gave him… he got his revelations directly from God and they were different from everyone else.

Here is his revelation of the first seal…

Did William Branham get this directly from God as he said?

From pictures of William Branham’s library published in Only Believe magazine, we know that William Branham had the books of Clarence Larkin. Here is a direct quote from Larkin’s book:

This “Rider” has a “bow,” no arrow is mentioned.
This White Horse Rider is the ANTICHRIST.
This “White Horse Rider” will be Satan’s “SUPERMAN.” (Clarence Larkin, The Book of Revelation: A Study of the Last Prophetic Book of Holy Scripture (1919), p. 54)

We also know that William Branham was familiar with the works of Charles Taze Russel, the founder of the Jehovah’s Witnesses. In his book, 1918 book, The Finished Mystery, Russell wrote:

And behold a white horse… And he that sat on him.
The Bishop of Rome, the embryo Pope, the personal representative of Satan.

What is clear is that William Branham did not have a special revelation of the first seal. He stole it from Clarence Larkin and Charles Taze Russel and passed it off as though it was something brand new that he got directly from God… a revelation that had been hidden from before the foundation of the world.

But this was clearly not true.

In Jeremiah 23:30, we see that God condemns self-proclaimed prophets who say they receive their inspiration from God, when in fact they stole it from someone else:

“Therefore,” says the LORD, “I am against these prophets who steal messages from each other and claim they are from me.

Why did William Branham say he received his revelation of the First Seal from God when, in fact, he stole it from Clarence Larkin and Charles Taze Russell?

Was he really fulfilling Jeremiah 23:30?

Links to other articles in the series

This article is one in a series of studies on the Seven Seals - you are currently on the topic that is in bold: