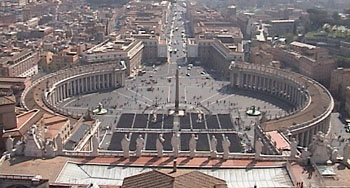 Summary of the prophecy

There are a number of problems with William Branham's prophecy relating to the WCC:

Compare this to the time of Christ. Jesus was not known outside of Israel at the time of his death but within just over 30 years after his death, the new Christian church came under the direct persecution of the Roman emperor Nero in A.D. 64. Before his death in A.D. 68, he also killed the Apostle Paul and Peter also died during his reign.

If the message really was the “restoration of the Word”, one would think that its notoriety would be increasing exponentially and the persecution would be marked and dramatic.

The Prophecies in Quotes

That's the only thing...that stops the Catholicism and Protestantism from uniting, is the order of communion. The Catholic church says, "It is the body," and the Protestant church says, "It represents the body." ...They call it a mass; we call it a communion. A mass is hoping it's so. A communion is knowing it's so and thank Him for it. See? And there's the only thing that they cannot get together on. They'll do it.[1]

Birth of the Antichrist

You young people, remember that you heard a minister say that. That'll finally wind up. And that is the mark of the beast, when she forms that World Council of Churches. And she'll give birth to her son, the antichrist.[2]

Bundles to be burned

They're getting bundled, all these organizations. Big bundles is coming to one big bundle. That's right. What is that bundle? You know what it is. World Council of Churches, forming the image of the beast. Truly. And you people that's scared of communism, I want you to show me one place in the Bible where communism will rule the world. Well, I'll tell you the Bible says that Romanism will rule the world. Exactly right.[3]

I am duty bound to a Message; not to be different, but because of love. Love is corrective. Come back! Stay away from that thing! You ministering brothers, I don't care what your groups does, stay away from it! Stay out of it! It's the mark of the beast, stay away from it! See, Jesus is knocking in this Laodicea age. See where they put Him out?[4]

When the little old church is still down yonder being borned again in a mess like any birth is, still paying the price, still getting down and dying out, acting the same way they did when they first got born at the day of Pentecost, same kind of a church down there... They'll be closed and shut out under the Federation of Churches. It'll be a boycott like a union or something. You'll either come in or you'll go out.[5]

It choked the Spirit right out of them, when they began to take wisdom instead of faith in the Word...And soon they're to form up a confederation of church, which will be the image to the beast. And he will have the same power in this nation (Revelations 13:11) that they had over there, and will cause a persecution upon the saints, just like they did at the beginning of the--the Roman church.[6]

The Mark of the Beast Identified

And remember, that we found without one mistake, that the mark of the beast is a mark of apostasy, that is, church members hanging to their church instead of walking in the Light. They reject Light, and there's nothing left by darkness (That's right.), both Catholic and Protestant. There is "a beast," and a whore," and she had "harlot" daughters. And these harlot daughters, when they broke forth, they were virgins from the Light of that day, and they organized and bringing people down here, back into here, making them the same kind of a thing that Rome was in the beginning. The Bible said so: the beast, and an image to the beast, the letter of his name, and so forth.[7]

Retrieved from "http://en.believethesign.com/index.php?title=World_Council_of_Churches&oldid=20532"
Categories:
This page was last edited on 22 August 2015, at 03:52.
Content is available under Creative Commons Attribution unless otherwise noted.
Privacy policy
About BelieveTheSign
Disclaimers
Mobile view