William Branham and the Treatment of Animals 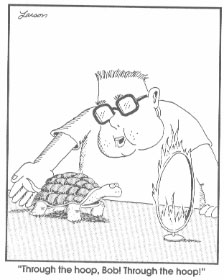 How did William Branham treat animals? Is it OK to mistreat them?

By his own admission, William Branham seemed to think it was funny if a person took a tortoise and set it on a hot fire.

So, according to William Branham, cruelty to animals seems to have been acceptable behaviour.

Reminds me of one day, me and my brother was going along, and we seen a--an old turtle. And that was the funniest looking thing I ever seen, old terrapin. Don't know whether you have them here or not. He can throw their legs like that, you know, when they're walking. I said to my brother, I said, "Isn't that a funny looking thing?"

We went up to him. He went [Brother Branham illustrates.--Ed.] Puts me in the mind of some of these people, when you really go to preaching the Gospel, they pull right back in their shell. "I belong to the Baptist. I belong to the Methodist."

Go on, if your name's not in heaven, you'll go to hell too. That's right. Only those who are written in the Lambs Book of Life, by being redeemed, born again... Jesus said, "Except a man be born again, he will not enter the Kingdom." Truly. Then you're born again, you become a new creature, a new creation in Christ. Oh, hallelujah. In other words... Don't get excited about it. "Hallelujah" means "Praise our God." And I praise Him. Amen.

Then that old turtle, I looked at him, how funny he looked. He drawed right back up. I said, "Well, I'll tell you what I'll do." I said, "I'll make him walk." I got me a big long willow, and I begin to pour it on him. He just laid there. You can't whip them into it. That's all there is to it. No, they'll just lay there and sulk.

I took him down at the water. I said, "I'll fix him up." I put him down in the water, and just a few bubbles come up. You can baptize them this way, that way, head forwards, anyway you want to. He goes down a dry sinner, comes up a wet one. He's still a sinner. You're not saved by water. That's right. I thought, "How can I get that old fellow moving." You can't argue baptisms and ever get the church to move on. Don't you think that. You can't do it.

I went down and got me a piece of paper, and build a little fire, and set the old boy on it. I tell you; he moved then. That's right. What we need today is a old time Holy Ghost, God sent fiery revival. Amen. That's right. That'll move them. That's right. Preach the fire where they can't sit still. True.

After while, took the old turtle down there, and he caught one and cut its head off. Laying there, and my brother come by, said, "You got a turtle?" "Yeah."

Looked down there, started to pick him up. And the old turtle's mouth laying there went, snapped at him. Been laying there about a hour. Said, "I thought you said you killed him."

I said, "I separated his head from his body." Said, "He's just dead and don't know it."

That's what's the matter with a whole lot of people. Dead and don't know it. That's right. Around them churchanities and so forth. Don't know what the power of the Holy Ghost means. Don't pay no attention to what science says, and this says, and that says, believe Christ. Amen. Oh, my. I feel good. Amen. I do, I feel good. Thank the Lord.[1]

Not long ago a brother and I were walking out along a creek. We found an old terrapin. I don't know whether you have them here or not, tortoise, turtle. And he was the funniest looking thing. He spread them feet like this, you know. And I said, "Look at that funny looking fellow."

And when we got down to him, he pulled back up in his shell like that. Puts me in the mind of some of these Christians, when you go to pouring the Gospel on to them. Them old lukewarm church members pull back up in the shell, "I belong to so-and-so. Doctor So-and-so said so." Get in there. I said, "I'll make him walk." And I went over and cut me a long switch, and I poured it on him. That wouldn't do no good. You can beat them into it.

I said, "I'll fix him up." I took him down at the creek and dumped him under the water. Just a few bubbles come up. Brother, you can go down a dry sinner and come up a wet one, just a few bubbles. You can baptize them this way, that name, up and down this way, back and forward, and sprinkle him, anything you want to he's still a sinner. That's right.

I went and got a piece of paper, and built a little fire, and set the old boy on it. He walked then.

Brother, what we need today is preachers back behind the pulpit that preach the power of the Gospel of Jesus Christ with Holy Ghost and fire baptism coming down upon the people. It'll make them walk then, not out here on these beaches on Sunday afternoon stretch themselves in a bathing suit. It'll make them walk to church. Not down and play golf on... O brother, does that scorch you.

Walked down there this morning, little ladies laying all around down there on that beach... Little women, I can't say ladies. Ladies don't do things like that. But lay down on the beach there with a bathing suit on stretched out for a suntan.[2]