You seen in the paper the other day where they're requiring the Pentagon to answer the flying saucer. It wasn't a myth; it wasn't something you'd imagine; it was real. It was an intelligence. They flew in battle formation. They could dodge. They could spot; they could tell; it was an intelligence. They know it. The people laughed. They said, "Flying saucers?" made a fun out of it. But you know what I'm thinking? Jesus said before He comes there will be signs in the heaven above. Did you notice before He destroyed Sodom and Gomorrah because of their sex affairs, He sent Angels down to investigate it. Angels has come to the earth in the last few years.[1] 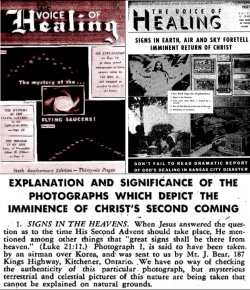 The Voice of Healing, William Branham's Magazine, also published news about flying saucers and Jesus' return. Sensationalizing a cloud over Arizona wasn't a big step after these articles.

' [Junior Jackson said] "I dreamed, Brother Branham, me and my wife was out riding." And said, "I looked back in the east, and I saw, look like, a spot, like one of them flying saucers."

See, the world don't know what that is, you know. You know it's on. We know what it is. See? We know it's investigating, judgment Angels, you see. And how at the Pentagon and all, about how it comes right down; and the intelligence, how they can go like a flash and be gone, pull away from anything they got. See, they don't realize what it is, see. Let them think whatever they want to. They call it flying saucers, or whatever. They don't know, see.[2]

The CIA tested its U-2 spy planes at 60,000 feet, an altitude that seemed impossible for man to reach at the time—leading observers, specifically pilots, to suspect it wasn't man up there at all. Once U-2s started flying at altitudes above 60,000 feet, air-traffic controllers began receiving increasing numbers of UFO reports." The CIA actually cross-checked the UFO reports with its flight records, according to the document, but in instances when it verified the UFO was really a U-2, the CIA stayed quiet.

So William Branham was correct that the mysterious lights in the sky were investigating. But were they collecting information on the world's sex activity to report back to God? Not at all. And was it really Angels in formation? Not unless those angels were on the CIA's payroll. Apparently there are a number of Blue Angels on the Navy's payroll as well.