On January 24, 1950, The Houston Press headlines read Baptist Cleric To Challenge 'Miracle Man. That evening there was to be a debate on divine healing between Rev. W. E. Best and Rev. F.F. Bosworth at the Sam Houston Coliseum. As the meeting was coming to a close that evening there was a fistfight, and a photograph taken of William Branham with a light above his head.

"They lay on cots under the glare of the great lights of Sam Houston Coliseum Tuesday night - the lame, the sick, the infirm, the ones whose hopes for physical health had almost gone. They lay there quietly, some of them uncomprehendingly, as the theological argument swirled about and above them.

For it was they who - Rev. F. F. Bosworth, an out-of-town evangelist, said - could be cured of their infirmities by the divine healing power passed on through Rev. William Branham, Rev. Mr. Bosworth's partner. But Rev. W. E. Best, pastor of the Houston Tabernacle Baptist Church, contended that any such "miraculous healing" had ceased with the apostles. And he challenged Rev. Mr. Bosworth to prove otherwise.

When the Rev. Best shouted there were those "who used sorcery to bewitch people, so that people are sincerely misled and say it's the power of God," James Ayers, a commercial photographer of 1610 Rusk, agreed.

"Branham puts on a show," said Mr. Ayers. "Somehow he never gets around to the cripples and the persons who have arthritis. He simply hypnotizes his audience." (Abridged) 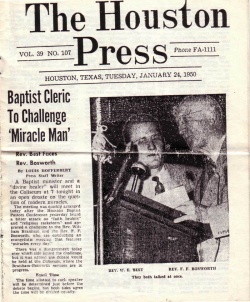 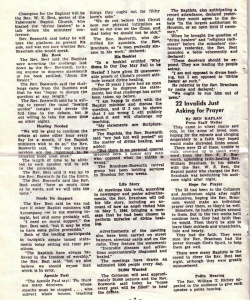 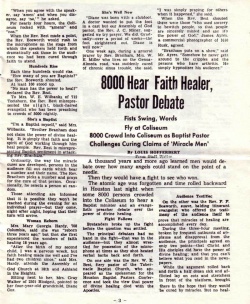 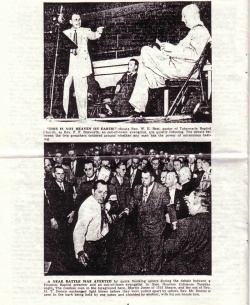 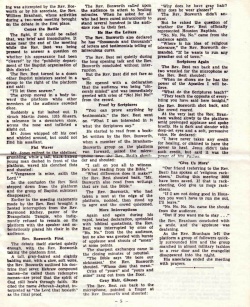