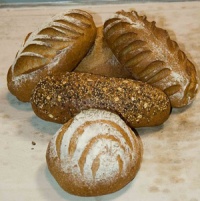 The vision showed bread that people in his tabernacle would not eat...

The following vision is taken from the tract I Was Not Disobedient To The Heavenly Vision, which was written and distributed by William Branham during his early campaign years.

It was in the month of March, 1945, one morning about 3:00 A.M. that our Lord Jesus Christ gave me a vision. This He has done many times and I most humbly praise Him for it.

At the beginning of this vision, seemingly, I was walking northeast on a road when the Spirit turned me and pointed me toward the west. I was facing a great mountain. It seemed to be the mountain of the Lord! It had a towering, high church steeple on the top of it. I was then asked to go west toward the mountain.

...and then his first vision about a tent.

'I entered the mountain through a door and on the inside I was met by a woman who had on a garment that might have been snow white at one time. Now the garment was very soiled. She asked me if I was Bro. Billy Branham and I replied, "I am." She then introduced herself as Mrs. Methodist.

I asked her why the spots on that lovely white garment. She replied, "I have been so busy." I then said to her, "That's right; you Methodists have so many organizations and societies in your church, you haven't had much time for the Lord." Then she said, "I was told that you were being sent to me. Maybe I should awaken my husband!" Then she disappeared.

Looking to my left, I saw a small heap of smooth-baked bread. There were white fowls standing near it, but they would not eat much of it. Then the Lord said to me, "Do you know them?" I said, "No."

Then He said, "That is your Tabernacle and they won't eat the bread of life anymore. I am sending you this way." Then I journeyed on westward.

I was then brought to a plain where a platform was erected. Seemingly, it was under a large tent or auditorium. There were curtains drawn in back of the platform. The Lord then told me to pull back the curtains and when I did I saw a great mountain of the bread of life. He then said, "Feed these," and turning around I saw white-robed people coming from everywhere, making up a large audience.

The following night, after the vision was over, I explained it to my church just as the Lord had given it to me.

Copy of the Entire Tract

The fulfillment of the vision can be found in the story of William Branham's first evangelistic campaign to St. Louis, MO in June 1945. Click here for the full tract.

Problems with this vision

There are several problems with the original vision that must be addressed.

William Branham preached a sermon called “I was not disobedient to the heavenly vision” (July 18, 1949) in which he does not mention this vision. Rather, he says during this sermon, “That truly a supernatural Being came to me and made these statements, and I have not been disobedient to the heavenly vision.” His sermon called “Angel of God” (November 11, 1947) was the first sermon in which he tells of the Angels’ commission. Later, when Gordon Lindsay wrote "A Man Sent From God", only the Angelic visitation is included, and the heavenly vision is forgotten.

In the vision, God told him that a "double portion of the Power to heal would be given me". Was this his commission to go and use his gift of healing?

In his recorded sermons, Brother Branham mentions the vision in the tract 6 times, all very short, as follows:

Why was this never mentioned in detail again? Was it because the second story about the angel's commission sounded better?

Another issue is with the actual timing of the vision. In the tract the vision came in 1945, while it came in 1946 in Gordon Linday's book. The impact this has on the Message is that William Branham's commission does not coincide with the inauguration of Israel.

Story 1, from A Man Sent From God, by Gordon Lindsay

I shall never forget the time, May 7, 1946…along in the night, at about the eleventh hour, I had quit praying and was sitting up when I noticed a light flickering in the room… Now, coming through the light, I saw the feet of a man coming toward me… the "special signs" which he had received during the visitation of the angel, he told his congregation of this only a few days before he left us to go to St. Louis….…It was on Memorial Sunday night in the year 1946, speaking in the tabernacle, that he told of his meeting with the angel…On the 14th day of June, 1946, Brother Branham, his family, and two sisters from his church left Jeffersonville for St. Louis where he was to begin his first healing campaign.” ....Testimony Of The Father - Rev. Robert Daugherty: … I will be glad to write to anyone in question of her healing, or any of the healings that took place during the revival which Brother Branham held there in St. Louis in 1946."

Story 2, from the tract "I Was Not Disobedient To The Heavenly Vision", by William Branham

It was in the month of March, 1945, one morning about 3:00 A.M. that our Lord Jesus Christ gave me a vision….The following night, after the vision was over, I explained it to my church just as the Lord had given it to me…About three weeks from the time of the vision, I received a telegram from a minister in St. Louis, Mo., by the name of Robert Daugherty…[tells of healing of Betty Daugherty, return to Jeffersonville, and request of people to return to St. Louis]…Many wanted to go with me, but as gas was rationed, we took only one car. Two Sisters from the church, my wife and nine-year-old son, Billy Jr., and I went…We left Jeffersonville in a car, on…June 14, 1945 and drove to New Albany…,then started for St. Louis, Mo.

Story 3, from the tract "Jesus Christ the Same Yesterday and Forever", by William Branham

Testimony Of The Father - Rev. Robert Daugherty: … “I will be glad to write to anyone in question of her [Betty’s – PMD] healing, or any of the healings that took place during the revival which Bro. Branham held here in St. Louis in 1945.

As gas rationing ended in 1945 and as Rebekah Branham was born on March 31, 1946, the tract called "I was not disobedient to the Heavenly vision" appears to be the most accurage version of the story, and not the version as published in "A Man sent from God".

The following article was published in the Bible Hour Bulletin, 70 years ago in December, 1946.

The Eighth Annual Watch Service of the Blessed Old Bible Hour will begin at 7:30 p.m. on December 31 and continue until after midnight. These have proved to be great services in the past and will be much greater this year. Bro. Wm. Branham and family are planning to be with us, and perhaps will bring some of their workers from Jeffersonville, Indiana. Of course we will be expecting many of the ministers and workers of this section to be with us for that night.

The program will be broadcast over KBTM, Jonesboro, from 10:30 p.m. until 12:30 a.m. - two full hours of broadcasting. Come be with us in this great service. We have almost been willing to give a prize the past seven watch services to anyone who would get sleepy during that time.

Tell your friends and make your plans now to attend the Eighth Annual Watch Service of the Blessed Old Bible Hour. Bring along your sick and suffering that night as Bro. Branham will also be praying for the sick in that service.

To Whom It May Concern:

I had T.B. for a number of years caused from an accident which occurred while I was employed by a railroad company. I had been a patient in the Rockville, Indiana Sanitorium, but still I was bothered very much with the disease.

I was visiting in Kentucky with some of my kindred when I began to have several hemorrhages.

About 4:00 a.m. one morning they called in my kindred for I was dying. The wife of a Methodist minister came in and many other neighbors, and had prayer for me. Finally I began to feel I was dying and could breathe no longer. In the meantime someone went to get Rev. Branham , who did not know that I was home at the time. I can just remember him coming in. Then it seemed I was going through air and I saw my mother who had been dead for about a year. I was just about to meet her when I heard the voice of Bro. Branham. In a few moments I was up and out on the floor, shouting and praising God. I have had no more hemorrhages since.

Friends told me that my pastor and Bro. Branham prayed earnestly for me before I passed away. My wife had been taken into another room and neighbors and my pastor were trying to console her. Bro. Branham was in the room with a Methodist minister's wife and another sister. He, too, turned to leave the room when suddenly some strange feeling came over him. Something seemed to impress him, "Don't you preach Divine Healing?" He turned to look at me again, and the Spirit of God came over him. He ran to the bed and threw himself across me, calling over me in the Name of Jesus Christ. It was then that I heard his voice and came back to life again.

All praises and glory to God be given.

Retrieved from "http://en.believethesign.com/index.php?title=Heavenly_Vision&oldid=22714"
Categories:
This page was last edited on 20 May 2017, at 14:48.
Content is available under Creative Commons Attribution unless otherwise noted.
Privacy policy
About BelieveTheSign
Disclaimers
Mobile view