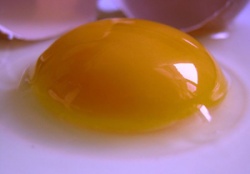 In 1963 William Branham said, "I went back in my book where the Lord spoke to me in 1931, and there I had written in my book, "In the last days, warn the people not to eat eggs or live in a valley.""

In a relatively unknown prophecy of William Branham from 1933, he said “In the last days, warn the people not to eat eggs or live in a valley”.

William Branham said that this was one of the prophecies that he had written down in his book of prophecies. In other words, it was accurate because he took the time to write it down, and did not have to rely on his memory.

However, William Branham ate eggs, fed them to his children, and lived in the Ohio river valley. He also ate a lot of food with eggs in them, like pancakes.

When asked about this prophecy in 1964 (see above), he said “it’s written in the scripture that no food should be received without it being received with thanksgiving, for it’s sanctified by the Word of God and prayer.” In other words, you can ignore his prophecy if you pray over your food and where to live.

Based on this explanation, how are any of the 1933 prophecies relevant for someone who is following the scripture?

Ellen White, the "prophet" and founder of the Seventh Day Adventist Church, stated that:

“Eggs should not be placed upon your table.”[1]

This appears to be another case of William Branham plagiarizing something from another source.

Do you remember years ago when I first, when we had the little bitty structure here, and I was prophesying, and said, "It shall come to pass in the last days, don't live in a valley and don't eat eggs." I've got it on my book. I thought there was something about that, and I went and looked at it. "Don't eat eggs." That was way back in 1933. Eggs has got something in them now, and I see where science says that a man over fifty years old should never eat an egg, because it's the hardest thing on a heart that can be eaten. Diseases![2]

When I heard that egg situation the other day, I went back in my book where the Lord spoke to me in 1931, and there I had written in my book, "In the last days, warn the people not to eat eggs or live in a valley." And, see, not know what fallout and things would be, see, but yet the Lord forewarned that, way back thirty years ago, see, "Not to live in a valley, in the last days," and, "Don't eat eggs," everything will be poisoned. See? And that's just what's happened. Now imagine that, thirty something years ago.[3]

Brother Branham, when you prophesy about: won't eat eggs, don't live in the valley, was that prophecy just for you or for the congregation?

Now, that was before they had fallout or knowed anything about fallout. But that was the Holy Spirit warning me. And right now, even to our cattle (You see them off the markets,) being sprayed by DDT has set up something in the cow.

Notice again, all this hybreeding stuff and things that they're doing is absolutely decaying the human race. "Thirty percent--twenty or thirty percent," Reader's Digest said, "of the patients in the hospital is put in there because of the doctors." They'll give you a medicine to knock this out of you, and it sets up something else over here.

And did you notice eggs? Last year hundreds of cases in Louisville and Jeffersonville fell sick and was hospitalized from vomiting from eating eggs that the chicken in the valley here... The eggs out of the valley picked up fallout and poison in weeds, and so forth; everything is contaminated.

But here's where you get it, my brother. I believe with all my heart that it's written in the Scripture that--that no food should be received without it be received with thanksgiving, for it's sanctified by the Word of God and prayer. See? If you eat it, say, "Lord Jesus, You prepared the food for me. Now, with faith I sanctify this food to the strength of our bodies." Then eat it, for in all we do is by faith.[4]