Difference between revisions of "F.F. Bosworth" 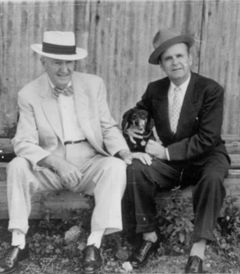 Fred Francis Bosworth (d. 1958) was a pastor, evangelist, author, radio personality, and close friend to William Branham. F.F. Bosworth was born in Utica, Nebraska, in 1877. As a young man, he was instantly healed of tuberculosis when a traveling Methodist "Bible woman" prayed for him. For the rest of his life, he became a witness to the healing power of Jesus Christ, and wrote the book "Christ the Healer" which is still in print today.

For a time, F.F. Bosworth was a Band Leader for for Alexander Dowie's church in Zion Illinois. He then started the first Assemblies of God church in Dallas, Texas in 1910. He later became controversial among Pentecostals when he disagreed with the doctrine that the initial evidence of the the Baptism with the Holy Ghost was speaking in tongues. Because of this disagreement, in 1918 he quietly withdrew from the Assemblies of God and started a Christian and Missionary Alliance church in Dallas. He was also beaten by vigilantes in Texas for crossing racial barriers in his preaching.

As an evangelist, F.F. Bosworth traveled extensively. One of his meetings in Ottawa, Canada recorded 12,000 conversions. He also received over 250,000 letters in response to his "National Radio Revival Missionary Crusaders" campaigns.

F.F. Bosworth wrote a chapter of the book "A Prophet Visits South Africa". The following testimonies are excerpts from that chapter that point to a legitimate healing ministry:

During a Fort Wayne meeting a lady came into the healing line carrying a child which was born with a club foot which with its leg was in a plaster cast. The moment Brother Branham saw them, without stopping to pray for the child's healing, he said to the lady, "O, yes, will you do what I tell you to do?" The lady answered "I will." Then he said to her, "Go home and get that cast off, and when you come back tomorrow night, bring the child, and she will have a perfect foot."

The microphone carried these words to all in the great audience. It took them more than an hour that night to get the cast off. When the lady brought the child the next night, the child had a perfect foot and was wearing a new pair of little white shoes and was walking. The doctor X-rayed the foot and found it perfect. (A Prophet Visits South Africa, pg. 41/42)

A young lady who was born with her eyes crossed and who was attending Bible School in Fort Wayne during the meeting there said to Mrs. Bosworth who was back at the book stand, "I can't see how I can ever get into that healing line, there are so many." Mrs. Bosworth said to her, "You won't need to, You just sit back here and ask God to lift your faith to the healing level, and you will pull from the gift the healing virtue."

She did this, and during the service Brother Branham stopped and pointed in her direction and said, "A young lady way back there was just now healed of crossed eyes." Her eyes have been straight ever since. (A Prophet Visits South Africa, pg. 43)

While praying for those in the healing line in a Flint meeting, he stopped and pointed up toward the second gallery to his right, said, "I have just now had a vision of a lady dressed in a blue suit wearing a striped waist. She has just been healed of a cancer." The woman sprang to her feet and with great joy said, "I am that lady." (A Prophet Visits South Africa, pg. 43)

After praying for one totally blind man, Brother Branham said to him, "Walk to the pulpit and put your finger on that preacher's nose." He walked straight to the minister and pulled his nose, causing the audience to laugh. (A Prophet Visits South Africa, pg. 45)

I heard him say recently to a mother bringing her little girl, "Lady, your child was born deaf and dumb; and as soon as you discovered she could not hear, you took her to the doctor." And then Brother Branham told the mother exactly what the doctor said. The mother said, "That is exactly right" (A Prophet Visits South Africa, pg. 39)

...But Brother Branham is a channel for more than the mere gift of healing; he is also a Seer as were the Old Testament Prophets. He sees events before they take place. I asked him, "What do you mean? How do you see them?" He replied, "Just as I see you; only that I know it is a vision." ...At these times he can say with absolute certainty, "Thus Saith The Lord," and he is never wrong. He told me that he simply acts out what he has already seen himself doing in the vision. The success of this phase of his ministry is exactly 100%. (A Prophet Visits South Africa, pg. 40)