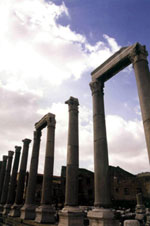 One of william Branham's key doctrines is the seven church ages. This article is one in a series of studies on the 7 churches of Asia Minor as found in the Book of Revelation - you are currently on the topic that is in bold:

Smyrna is the second city mentioned in the Book of Revelation to receive a message from Jesus Christ. Smyrna (Greek: Σμύρνη, meaning: myrrh, a perfume) is an ancient city (today İzmir, Turkey) that was founded on the Aegean coast. Aided by its advantageous port conditions, its ease of defense and its good inland connections, Old Smyrna rose to prominence before it was destroyed in the 6th century B.C. Its initial location at the northeastern corner of the tip of the Gulf of Smyrna, commonly called "Old Smyrna", was moved to the southeastern corner of the Gulf of Smyrna on the slopes of Mount Pagos (Kadifekale today) at the time of Alexander the Great. At the heart of the new city is the Izmir Agora Open Air Museum, where ancient ruins still remain today.

Smyrna began as an Aeolian city-state, marking the Aeolian frontier with the Ionian colonies. Smyrna became the thirteenth city-state of Ionia when Ionian defectors hijacked the city while the Aeolians were partaking in a festival to Dionysos outside the city. The Ionians increased Smyrna's defences, but Theognis (about 500 BCE) declared that it was this pride that destroyed Smyrna. Alyattes III of Lydia conquered and sacked old Smyrna in 605 BC, attracted by its wealth, and the Persians thoroughly destroyed the city in 545 BC for supporting Lydia. Though Smyrna did not cease to exist, the Greek life and political unity were destroyed, and the polis was reorganized on the village system.

Alexander the Great refounded Smyrna around 300 BC, and its consruction was carried out by his successors who enlarged and fortified the city. As Old Smyrna could only handle a few thousand people, the Hellenistic city was moved on the modern site of Izmir. The beauty of the Hellenistic city, clustering on the low ground and rising tier over tier on the hillside, was frequently praised by the ancients and is celebrated on its coins. Hellenistic Smyrna had an acropolis, stadium, theatre, a temple to Zeus ("Father of the gods"), and a temple to Cybele (the "Great Mother").

Smyrna grew substantially under Roman rule, vying with Ephesus and Pergamum for the title First City of Asia with a population of about 200,000. A Christian church existed here from a very early time as there was a considerable Jewish population in the city. Polycarp, bishop of Smyrna, was martyred in the city in 153 AD. In 178 AD, a severe earthquake leveled the city, and the Roman Emperor Marcus Aurelius contributed to the rebuilding of Smyrna as the damage was too great for the residents of Smyrna to handle on their own.

When Constantinople became the seat of government, the trade between Anatolia and the west lost in importance, and Smyrna declined. The city was exchange hands between the Turks and the Crusaders several times after 1000 AD, and today it is a liberal Muslim city in Turkey. The major conquests were as follows: