One of william Branham's key doctrines is the seven church ages. This article is one in a series of studies on the 7 churches of Asia Minor as found in the Book of Revelation - you are currently on the topic that is in bold:

Ephesus ( Greek: Έφεσος "permitted", relaxed, or aimed at") was one of the great cities of the Ionian Greeks in Asia Minor, located in Lydia where the Cayster river flows into the Aegean Sea (in modern day Turkey). It was founded by colonists principally from Athens. The ruins of Ephesus are a major tourist attraction, especially for people travelling to Turkey by cruise ship via the port of Kuşadası.

Ephesus is the first Church mentioned in the prophetic book of Revelation (Rev 2:1-7). 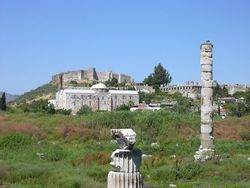 Site of the Temple of Artemis (Diana)

The "Lady of Ephesus", identified by Greeks with Artemis(Diana), was venerated in the Temple of Artemis, the largest building of the ancient world, according to Pausanias and one of the Seven Wonders of the World, of which scarcely a trace remains (illustration, left). This temple housed virgin priestesses, eunuch priests, a high priest with political power, and temple slaves.

Beginning in the Roman Republic, Ephesus was the capital of proconsular Asia, which covered the western part of Asia Minor. The city bore the title of "the first and greatest metropolis of Asia." Besides the Temple of Artemis, Ephesus was known for its library and theatre, which would have been capable of holding 25,000 spectators. It was, like all ancient theatres, open to the sky; it was used initially for drama, but during later Roman times gladiatorial combats were also held on its stage. The population of Ephesus has been estimated to be in the range of 400,000 to 500,000 inhabitants in the year 100 AD, making it the largest city in Roman Asia and one of the largest cities of the day. Ephesus also had several major bath complexes, built at various points while the city was under Roman rule. The city had one of the most advanced aqueduct systems in the ancient world, superior to any modern system in the region today, with multiple aqueducts of various sizes to supply different areas of the city, including 4 major aqueducts. 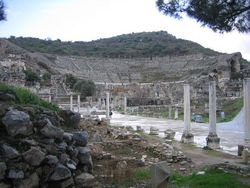 The Roman Theater at Ephesus

Ephesus was an important center for early Christianity. Paul the Apostle established the church at Ephesus, used it as a base, and it is said that John, Peter, Mary, Andrew, and Philip are buried there. In Ephesus, Paul became embroiled in a dispute with artisans, whose livelihood depended on the Temple of Artemis there (Acts 19:23–41). Paul wrote I Corinthians from Ephesus, and later addressed the Epistle to the Ephesians to the Christian community at Ephesus.

Paul departed from Ephesus after three years, and Timothy became the city's first Bishop. The Apostle John was also said to have lived in Asia Minor in the last decades of the first century, and from Ephesus guided the Churches of that province. After Emporor Domitian's death, the Apostle John returned to Ephesus during the reign of Trajan, and at Ephesus he died about A.D. 100 "at a great age".

The decline of Ephesus

Jesus said in Revelation 2:5 that if the church at Ephesus did not repent, he would remove the candlestick out of its place. After John's death, his disciple Polycarp moved to Smyrna, and tutored Irenaeus in that city. Irenaeus moved to Gaul, while Ephesus and Rome held a major dispute over the date of the celebration of Easter. In 263 Ephesus was sacked by the Goths, but was reconstructed under the Byzantine empire.

While Martin of Tours was a young man, the council of Nicea (325) was held, and Ephesus was granted control over the churches in Asia Minor. The Third Eccumenical Council was held in Ephesus, which continued to dispute with Rome about the nature of Christ (Monophysite dispute) until it accepted the Roman doctrine. At the council of Ephesus in 431, the Catholic churches gave Mary the official title of "the Mother of God".

In the 6th century the harbour at Ephesus filled in with silt (despite repeated dredges during the city's history), removing its access to the Aegean Sea. A subsequent earthquake caused the river to change its course, leaving Ephesus' ruins several miles inland. The old harbour became a malarial swamp, and most residents left Ephesus.

The town of Ephesus, a remnant of its former glory, changed hands between the Arabs and the Byzantine empire many times, its treasures were moved to Constantinople, and the city was finally destroyed in the Turkish civil wars around 1400. Today, only a small town exists outside Ephesus proper (Aya Solouk, Pop. 3,000), and the ruins of Ephesus are considered to contain some of the best Roman ruins surviving to date.