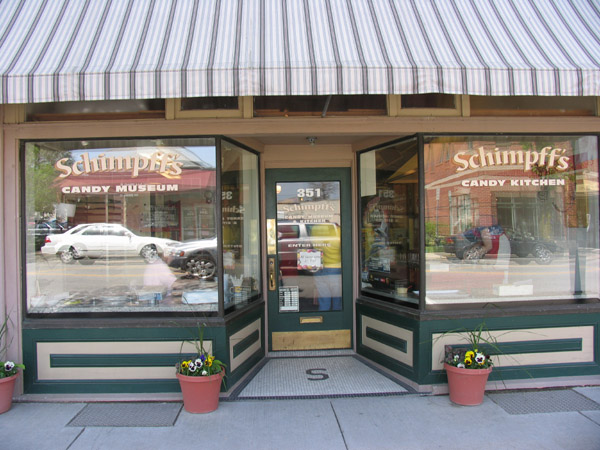 Is Mr. Schimpff here tonight? I'd like for him to tell it if he's here: Sonny Schimpff; great healthy man. Many times when I used to... I hate to say this, but it's the truth. Pop used to give me a dime, if I worked all week, and I'd come to town and park my bicycle around at Brother Mike Eagan's place (one of the trustees here) with Jimmy Pool (I think his son is here tonight.)--Jim, and I, and Earnest Fisher; and we would go downtown, and go to the picture show and--for a nickel. And we used to see the old still pictures. We was little kids and wanted to--about eight, ten years old; they had that William S. Hart (Many of you guys don't remember him.) the old actor (still pictures) and I couldn't read; I just had to watch what was going on. And it would have to spell it all out, and I couldn't make it, but I watched what he was doing; and I'd have an extra nickel. How many remembers getting a penny ice cream cone? All right, I could get three ice cream cones and two pennies worth of red hots. I couldn't hold the ice cream cones, so I'd eat them, and get me two pennies worth of red hots, and it'd be almost a half of a pound of them things, and Schimpff's made them, and I'd go in there, and set back, and watch William S. Hart.
And this young fellow (a little older than I) stricken down with a disease that five noted specialists of Louisville passed him by, weighing about forty-five pounds, and was dying... Miss Morgan was nursing him, and he was in such a condition. He had so many things: his lungs was gone; his throat was gone; his little arms was just about that big around, and he was laying there dying. And Miss Morgan was hired to come on the job, so she said to him, "I was once the cancer patient," and begin to tell him.
He said, "Who did you say, Billy Branham? Why," He said, "I have sold him a many bunch of red hots and ice cream cones." He said, "Wonder if he'd come pray for me."
And I went over to pray for Junie Schimpff. And now, if you'd like to talk to him, it is Schimpff's Candy, down here right next door, or second door from Leo's Theatre, down the street: Schimpff's Candy. All of you here know where that's at. My, it's one of the oldest establish in Jeffersonville. And while laying there dying, with five specialists giving him just hours to live, it was, "THUS SAITH THE LORD, you'll not die, but you'll sell me again red hots over the counter."
Long... I knowed he got well, but long had I forgotten that; and wife and I was going down to buy some candy when we got here at Christmas, and how I don't know, that we ever thought of Schimpff's; 'cause we usually go over here to some of these drug stores and pick it up, but we stopped in front of Schimpff's.
When I went in, his sister looked and she said, "Well, Brother Branham." She said, "You remember Junie?"
I said, "Yes," and there a great big strong healthy looking fellow. And I walked over to the counter, looked at it, looked down like this; I said, "I'll take a pound of those red hots."
And he said, "Yes, sir."
So his sister was waiting on my wife, and so he got them out and I said, "I used to eat them along time ago over here in the picture show," (keep my head down).
And he said, "Yeah," said, "many kids buy that; they still buy it." I said... He said, "My father made that; fixed that up formula." I said, "I really like them." Now, after he got all fixed up and handed it to me, he said, "Is there anything else?"
And I said, "I don't know," and raised up... Oh, my.
He said, "Brother Branham!"
I said, "Here's the red hots that I told you THUS SAITH THE LORD about five years ago."
He said, "Brother Branham, I am so completely healed, I... There's not even one effect. I am a teeny bit hard hearing in one ear." (I guess he is in his fifties). He said, "I'm a teeny bit hard hearing in one ear, because they give me so much antibiotic when I was in there." Amazing grace of Jesus Christ...

Click on a date/time to view the file as it appeared at that time.

You cannot overwrite this file.

The following page uses this file:

This file contains additional information, probably added from the digital camera or scanner used to create or digitize it.

If the file has been modified from its original state, some details may not fully reflect the modified file.