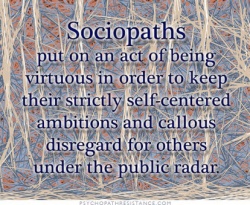 These unique message pastors generally have charismatic personalities - inescapable magnetism, winning style, and self-assurance - with which they promote their unique message within the message. Even more important than charisma; however, is their persuasive skills which are more important to the longevity of the church than the pastor’s charisma.

The Profile of a Sociopathic Pastor

Sociopath and psychopath are really the same thing. The term "sociopath" is preferred by those that see the causes of the condition as due to social factors and early environment, while the term "psychopath" is used by those who believe that there are psychological, biological, and genetic factors involved in addition to environmental factors. Typically psychopathy refers to a condition where the individual lacks a sense of empathy or morality, while sociopathy differs in sense of right and wrong from the average person.

Psychopathy is most commonly assessed with the Hare Psychopathy Checklist, Revised (or the PCL-R) created by Dr. Robert Hare which is a 40 point scale. Any score that is greater or equal to 25 would generally be considered a psychopath (or sociopath). A normal score would be considered to be 5 or less.

In the case of a sociopathic pastor, they may exhibit some, or all, of the following characteristics to a greater or lesser extent:

Glibness is a hallmark of sociopathic pastors. They are able to use language effortlessly to beguile, confuse, and convince. They are captive story tellers, and are persuasive. They have the capacity to destroy their detractors verbally or disarm them emotionally.

Sociopathic pastors do not recognize the individuality or rights of others, which makes any and all self-serving behaviors permissible. This type of person is adept at interpersonal manipulation based on charm. The manipulator appears to be helpful, charming, even ingratiating or appearing to put the church first, but is covertly hostile and domineering.

Grandiose sense of self

Sociopath pastors enjoy tremendous feelings of entitlement. They believe everything is owed them as a right. They present themselves as a special leader: enlightened, a vehicle of God, uniquely gifted, the only appropriate leader of the church, and sometimes the most humble of the humble.

Paranoia often accompanies the grandiosity, reinforcing the sequestering of the group and the need for protection against any one who has left the church. They create an us versus them mentality.

Sociopathic pastors lie coolly and easily, even when it is obvious they are being untruthful. They lie for no apparent reason, even when it would seem easier and safer to tell the truth. Confronting these lies may provoke an unpredictably intense rage or simply a smile. It is often difficult to determine whether the lies are an actual delusional distortion of reality or are expressed with the conscious or unconscious intent to deceive.

These manipulators are rarely original thinkers. Plagiarists and thieves, they seldom credit the true originators of their ideas.

They are extremely convincing and forceful in the expression of their views. For them, objective truth does not exist. The only “truth” is whatever will help them achieve their needs. This type of opportunism is very difficult to understand for those who are not sociopaths. For this reason, followers are more apt to invent or go along with all kinds of explanations and rationales for apparent inconsistencies in behavior: “I know my pastor must have had a good reason for doing this” or “He did it because he loves me—even though it hurts.”

Lack of Remorse, Shame, and Guilt

At the core of a Sociopath is a deep-seated rage, which is split off (i.e. psychologically separated from the rest of the self) and repressed. Some researchers theorize that this is caused by feeling abandoned in infancy or early childhood.

They see those around them as objects, targets, or opportunities, not as people. They do not have real friends; sociopathic pastors have victims and accomplices - that later end up victims. To the sociopath the end justify the means, and there is no place for feelings of remorse, shame, or guilt. Nothing gets in their way.

While sociopathic pastors may display outbursts of emotion, these are more often than not responses calculated to obtain a certain result. They rarely reveal a range of emotions, and those they do reveal are superficial at best, and fabricated at worst.

Positive feelings of warmth, joy, love, and compassion are more feigned than experienced. They are unmoved by things that would upset the normal person, but outraged by insignificant matters. They are bystanders to the emotional lives of others, perhaps envious and scornful of feelings they cannot have or understand. In the end, psychopaths are cold, with shallow emotions, and they live in a dark world of their own.

Hiding behind the “mask of sanity,” the sociopathic pastor exposes feelings only insofar as they serve an ulterior motive. He casts himself in a role of total control, which he plays to the hilt.

What is most promised by the Gospel and the church — peace, joy, love, and security — are goals that are forever out of reach of the leader, and thus also the followers. Since the leader is not genuine, neither are his promises.

Although he may refer to himself, for example, as the “living embodiment of God’s love,” the leader is tragically flawed because he is unable to give or receive love. Love substitutes are given instead.

The leader’s tremendous need to be loved may be accompanied by an equally strong disbelief in the love offered by his followers, which results in often cruel and harsh “testing” of his devotees.

Callousness and Lack of Empathy

Sociopathic pastors readily take advantage of others, expressing utter contempt for the feelings of others. Someone in distress is not important to them. Although intelligent, perceptive, and quite good at sizing people up, they make no real connections with others. They use their “people skills” to exploit, abuse, and wield power.

Sociopathic pastors are unable to truly empathize with the pain of their victims. Church members engage in denial about this callousness, because it’s so difficult to believe that someone they love so much could intentionally hurt them. It therefore becomes easier to rationalize the leader’s behavior as necessary for the general or individual “good.”

Sociopathic pastors rarely accept blame for their failures or mistakes. Scapegoating is common, and blame falls upon followers, those outside the group, a member’s family, the government, Satan — anyone and everyone but themselves.

Sociopathic pastors have an innate ability to attract followers who have the skills and connections that they themselves may lack. The longevity of the group is dependent on the willingness of the leadership to adapt as needed to preserve the group.

As you read the descriptions above, you may notice characteristics that match and explain some of the attributes, attitudes, and behaviors of your pastor. Unmasking or demystifying the leader is an important part of postcult recovery. Becoming familiar with the characteristics of this personality disorder may help you prevent being revictimized.

Here are some questions to ask about your own experience: