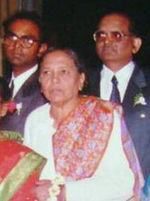 Esther Massey stands in front of her nephew, Edmond Titus (right) and his son Deepak (left)

Esther Massey (nee Titus) was in her mid-20's when she was given prayer card #1 in the Bombay, India meetings. She had become terribly sick, and the doctors were unable to diagnose her disease. Coming across the platform, William Branham revealed her name, her condition, and told her that she was a child of God who had no guile in her heart. After a short prayer, she was instantly healed. Esther Massey, along with her father and sister, also witnessed the healing of the blind man after William Branham's challenge to delegates from other religions to come and give the man back his sight.

Esther Massey was 79 years old as of 2007, and was active, healthy, and free from the sickness that afflicted her when she walked across the platform in William Branham's India meetings at that time.

The testimony below is also first-hand evidence that William Branham used prayer cards in India.

I am Edmund Titus, from Nagpur, which is centrally located in India.

It was in the 1950s that one of my father's younger sisters was seriously ill. And in spite of the best doctors that we have, and Asia's biggest medical college that we have in Nagpur, they could not diagnose her disease. And finally, the doctors left her to die.

My eldest Aunt, she came to know that Brother Branham is coming, and he is gifted with great power of healing and miracles. So, having heard such a great reputation, my grandparents along with my eldest aunt, took my ailing aunt to Bombay. At Bombay, on the first night, my Aunt, Esther Titus, who is now known after marriage as Esther Massey, she got the first prayer card. And, when she was called on the stage, Brother Branham immediately discerned, and told her that she is Esther Titus, he told her from where she came, he even told her that she is a child of God, and she has no guile in her heart, and that Jesus Christ pronounces her healed.

She was instantaneously healed. And that was in 1954, and to today, that is in 2007, she is in perfect health, without any medications.

Healing of the blind man

Now my aunt, and my grandparents also witnessed the healing of the blind young man, that was there, on the first night. And Brother Branham had challenged all the religious heads and religions of India, to come and heal that man. But nobody accepted the challenge, and, we all know, Brother Branham describes how silent was the atmosphere. And then Brother Branham challenged, and said, "If Jesus Christ heals this boy, heals this man, how will give your life to Jesus Christ." And hundreds of thousands of hands went up. And my grandparents and my aunt, saw the healing of the blind boy also.

Retrieved from "http://en.believethesign.com/index.php?title=Esther_Massey&oldid=20998"
Category:
This page was last edited on 25 August 2015, at 04:04.
Content is available under Creative Commons Attribution unless otherwise noted.
Privacy policy
About BelieveTheSign
Disclaimers
Mobile view