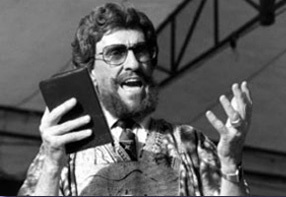 Dr. T.L. OSBORN, was a friend of William Branham. Shortly after hearing William Branham speak in 1947, Dr. T.L. Osborn and his wife Daisy were inspired to begin their own miracle-ministry in 1949 (OSBORN Ministries International, based out of Tulsa, Oklahoma).

T.L. Osborn is known for his world-wide missionary activities, his writing, and his preaching. Several of his books have become textbooks in Bible Schools around the world. (Biography notes taken from Osborne.org)

An excert from William Branham's funeral service, which was taken by Dr. T. L. Osborne, is printed below.

Despite the fact that T.L Osborn called William Branham a prophet, he did not consider him Elijah, and did not follow his doctrines. T.L Osborn was convinced that William Branham's healing ministry was genuine, but stated that God has come in the flesh in all of us.

Thus, the halo of light that appeared at his birth, the star, the angel, the discernment, the gifts — all of these were given for that purpose. For what? TO SHOW US GOD AGAIN! To repeat what He showed us in Jesus Christ, when He came in the form of flesh; and to remind us one final time. Like Jesus, Brother Branham redemonstrated the very thing which made men believe that the true Messiah had come.

He was a seer; he saw. He lived in both worlds, the seen and the unseen at the same time, and transcended both of them practically all the time. Jesus said, “My Father worketh hitherto, and I work. The Son can do nothing of Himself but what He seeth the Father do.”

Here comes Brother Branham along in the twentieth century and does exactly the same way. GOD IN THE FLESH, again crossing our paths; and many did not know. THEY WOULD NOT HAVE KNOWN HIM IF THEY WOULD HAVE BEEN HERE WHEN GOD CROSSED THEIR PATH IN THE BODY THEY CALLED JESUS CHRIST! People have not changed. Those who questioned then, would question now. Those who didn’t believe then, would not believe now. “The Son can do nothing of Himself, but what He seeth the Father doing. For what things soever He doeth, these also doeth the Son likewise. For the Father loveth the Son and showeth Him all things.” 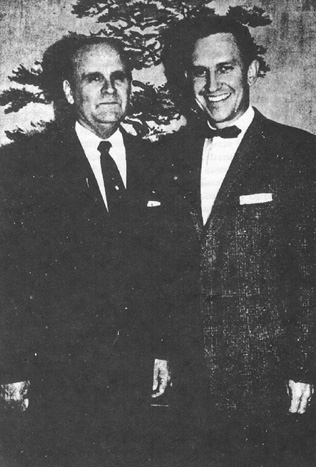 He saw the miracles before they happened. Jesus saw the crippled man who 38 times had been to the pool but never could get into the water. Jesus saw all this before He went in, stood there, and told him to stand up.

He saw Lazarus raised before it came to pass. He had already settled it with the Father. It had already been rehearsed.

He saw Nathanael before Philip ever called him, when he was over under the fig tree, before they were even converted.

He foretold exactly how the disciples would go down the streets and meet a man carrying a pitcher of water. He said that they should follow him and would find an ass tied there, and He also told them to bring him. He saw all this before it happened.

This was William Branham’s life. Precisely as we read it in the Scriptures . Then men hear Brother Branham say this, and they say, “It is wrong today;” but it isn’t. They don’t believe today; they would not have believed then. But God has come again, crossed our paths again, and showed us again what the God-man is like, what God is like, what He is like in the flesh, and what the new creation is like.

...Brother Branham knew diseases. He knew them everywhere before anyone told him. The same God knows all things. It is God in man, demonstrating His knowledge — what He is, how that He transcends all natural barriers, and nothing is impossible with Him.

He knew when virtue had gone out of him. How many have sat and watched when Brother Branham whirled around and said, “There she is”, “There he is”? Only once in the Scriptures did the little woman see this. Of course we do have the fact that later everybody heard about it, and they all got it; but only one case is set forth in detail. But my eyes have beheld dozens of cases, and some of you have seen hundreds of cases! How can I not believe?

This does not bring doctrinal barriers to me. This simply tells me that what happened then is the same today. My God is unchanged.

By these signs it is witnessed in the Scriptures that the Gentiles were made obedient by word and deed through mighty signs and wonders by the power of the Spirit of God. Have we not looked on and seen the multitudes come to Christ as they beheld the wonders and repented of their sins, cried out for Salvation, and received eternal life, not only here, but abroad to the count of as many as 30,000 in a single day, standing to receive the life of Jesus Christ, because God crossed their path in human flesh and unveiled Himself?

Is this a mystery? This is not a mystery, this is the wonder of God! Is this a matter to dicker over doctrinally? This is a matter to give glory to our God, Who has come in the flesh again in our generation. He has come in the flesh in all of us, but in a particular way in this man who was His prophet for this generation, for He surrounded him with these supernatural signs which were to attract the attention of the world once again by a sign.