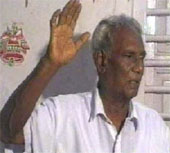 Sunder Rao was present at William Branham's meetings in Bombay, India. He witnessed William Branham calling people out of the crowd by name, diagnosing their diseases, the people confirming that both were correct, and then watching them receive their healing. Even the person sitting next to him was miraculously healed.

Sitting outside the window

I attended the William Branham meeting at St. Paul’s Indian National Hindustani Church. The place was packed with people who had come from all over India, and I just couldn’t get in. I then went around the Church and somehow managed to get a place near a window at the back of the Church, where Brother Branham was.

A Christian friend of mine Mr. Nagraj had got a place to sit on the second bench inside the Church. Next to Mr. Nagraj was an Anglo-Indian woman full of oozing leprosy and beside me was a woman on a stretcher dying with cancer who had come by air from Calcutta (Capital of North-East State of West Bengal).

Brother Branham then began calling names of various people, and one by one they began to stand up both men and women. Brother Branham told them they were all suffering from the same sickness as Mr. Khan and they all affirmed. Then Brother Branham said, ‘In the Name of Jesus Christ of Nazareth you are all healed.’

When Brother Branham said that, all the people began screaming and shouting as they were being instantaneously healed. Mr. Nagraj saw the leprous woman healed instantly.

The woman with cancer got up from the stretcher and began leaping and shouting and running. Amazed, I ran after her and asked her, “Sister did you really have cancer and you’re healed now?” She said, “Yes, I came by air from Calcutta dying with cancer and now I’m every bit whole. Hallelujah!”

The Healing of the blind man

I also saw a man totally blind get his sight instantaneously. The crowd by then became restless and were screaming and shouting. Brother Branham asked the crowd, ‘How many will now forsake their religion and accept Jesus Christ as their God and Saviour?’ Everybody including Sadhus (Hindu priests and sages) raised their hand.

Then to protect Brother Branham from the restless surging crowd, Bro. Branham was whisked away from the Church.

Christ was in him doing the miracles, otherwise it is not possible. I have seen many men pray for the sick but never was any meeting like this where instantaneously people were made completely whole.