James Gordon Lindsay was the pastor at a church in Ashland, Oregon until he resigned this position in 1947 to become William Branham's campaign manager. He began the Voice of Healing magazine in 1948, and documented William Branham's life story and miraculous campaigns in a book titled ""A Man Sent From God".

A Man Sent From God

The following testimonies are excerpts from Gordon Lindsay's book, A Man Sent from God: 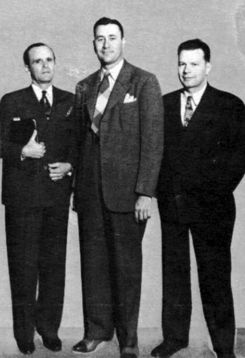 William Branham (on his toes), Oral Roberts, and Gordon Lindsay

We stopped over at Calgary, Canada, where Brother Branham was holding a seven day meeting. We had the opportunity to assist in the prayer-line, and there had a close-up view of the ministry of our brother. In one instance, we watched as he talked to a man lying on a cot. At first there was no sign of an intelligent response from the man. Explanation then came from the wife standing by, that the man was not only dying off cancer, but was deaf and could not hear what was being said.

Brother Branham then said that it would be necessary for the man to receive his hearing so he could instruct him concerning the healing of his cancer. There was a moment of prayer. Suddenly the man could hear! Great large tears rolled down the cheeks of that man whose face all evening had been so expressionless and impassive. He listened with deep interest as he was told of his deliverance from cancer.

One incident was of singular interest to Brother Moore and the writer. At the close of one of the services, as we were leaving the stage, a mother stopped and pleaded with us to pray for her little boy who was about five years of age and who was a deaf mute. She said she feared that Brother Branham would not be able to get to him. Brother Moore looked at me and said, "Lets pray for him." After prayer we took him to the piano and satisfied ourselves that he could hear the music and then walked off the stage.

The next evening, during the healing service, we looked and lo, the same woman and the little boy came for prayer. She had secured a card (which were given by lot), and decided to use it, thinking that it would do no harm to bring the boy in the line again. Brother Moore and I naturally were intensely interested to know what Brother Branham would say to her as the spirit of God spoke through him.

As he looked at the child he said, "Mother, your child has been deaf," which was of course correct. Then he looked again and said words to this effect. "Someone who has faith in God prayed for your child last night. Your child is delivered."

Conversions at the Life Story

The large tent was not only filled but many were standing on the outside as Brother Branham began to give the story of his life. ...As we observed the audience, we saw strange men freely applying their handkerchiefs as copious tears streamed unashamedly down their cheeks. The writer never saw an audience more moved. Finally, as the evangelist brought his message to a close and the altar call was given for sinners, a most remarkable scene transpired. Apparently almost every sinner in the vast congregation stood to his feet requesting prayer that he might be saved. Various estimates of the number which responded to this one altar call were anywhere from 1500 to 2000 people.