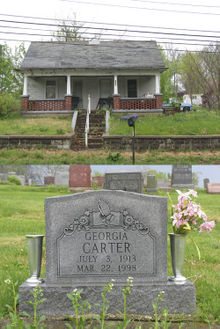 The home where Georgia Carter was healed, and the grave marking her passing in 1998.

The following letter appears on pages 200-201 of the book "William Branham, A Man Sent From God" written by Gordon Lindsay:

TO WHOM IT MAY CONCERN:

I had been in bed on my back for 8 years and 9 months with T.B. and the doctors had given me up. I hardly weighed 50 lbs. and it seemed that all hope was gone. Then from Jeffersonville, Ind., about 35 miles from our home, came Rev. Wm. Branham, in a vision which he had seen of a lamb being caught in the wilderness and was crying "Milltown" (that is where I live.) Bro. Branham had never been here or known of anyone from here. Coming in, he laid hands on me and prayed, calling over me the name of our dear Lord Jesus. Something seemed to take hold of me and at once I was up and thanking God for his power to heal. I went out-doors for the first time in eight years, then was baptized in the river. I am now the piano player at the Baptist church here. Much more goes with this great healing. I have not room in this testimony to write it all. I will gladly write and tell in full to anyone interested in my healing.

Georgie Carter, Milltown, Indiana. And she belonged to a church that did not believe in Divine healing. She was taking piano lessons when she was a little girl, and her Uncle was taking her to this--to a piano lesson. And when he did, this man, being a full grown man, and her a little girl, ravished the child. And when it did, it give her TB. And she'd been laying nine years and eight months on the flat of her back with TB of the female glands, all through her body and into her lungs...

November 14, 1955, Sermon: The Darkest Hour Then Jesus Comes Along

And so I was praying, and I opened up my eyes, and I thought that was a--a chair of clothes setting there. But It was something white. And It was coming towards me. And I found out It was that Light. And when It come to me, I... enclosed around, I was going down through a wilderness pulling sticks out of the way and brush. And I could hear... I was after a little lamb that was a bleating, going, "Baa, baa." And I was trying, I said, "Poor little fellow." And I was pulling real hard. It was a vision (See?), trying to get to the little lamb. And I kept pulling, pulling. And I listened again, and I'd hear bleating, and oh, I was so tired and I--I'd pull again. I said, "Poor little fellow, I'll get to him after while."

And as I got closer, it become a human voice. And instead of going, "Baa." It was saying, "Milltown, Milltown, Milltown." And just then I said, "Milltown? Where's that?" And I come to, and I was standing right on the edge of the bed with my hands up, screaming, "Where is Milltown?"

And I went up in the woods and I knelt down...And I kept praying, "O God, what is this burden on my heart? Have I done something, or--something You want." And I felt the Angel of the Lord near, and I raised up. Shining right down through a little dogwood bush was a yellowish green Light. I heard a voice say, "Go by the way of Carter's."

...And the same time, her critical mother... Georgie was crying and praying because her mother had treated me the way she had. And so she went out in the kitchen and she knelt down to pray. She said, "O God," said, "that reprobate that's come through the country here, called Branham," said, "He's got my child all stirred up in there," and said, "poor little thing laying there dying. And today," said, "she just cried, and her little eyes are red." Said, "He's got her all stirred up about a lot of psychology." Said, "O God, put a curse on that man, or do something," like that, going on, said, "Oh..." praying.

Said, "Who's that a coming?" And he looked, and said she seen me coming. This same Bible, I had over my heart, like that. Said she seen my hair, thinning in the front. She said, "Well, that's that preacher." And she jumped up. She said, "O God, please. Was I in a trance, or what's happening? I'm losing my mind."

And she run into the room, said, "Georgie, you know what?"

And about that time the door closed. And here I come, just according to the way she seen the vision. Here I come walked with a Bible over my heart, and two men followed me. Oh, my. When there... There isn't a demon out of hell could stop it then. God's done spoke it; prayer is done answered. That's right. Something has to happen.

...I went up to the door and opened the door. And there she was laying there, poor little thing. And her lips a quivering. Her mother startled, couldn't finish telling her what had happen, like that. I walked right over to the bed and put my hands on her. I said, "Georgie, even Jesus Christ, Who gave me the vision of a lamb hung in the wilderness down here somewhere, has appeared to me today in the woods, and has sent me here that I might lay my hands upon you that you should be well."

And how was she to raise up, limbs that big around, hadn't moved for nine years and eight months, laying on a bed? But when God speaks, He gives strength. That's right. Taken her by the hand... She looked at me, like that, and her eyes looked like they set. And I took her by the hand and raised her from the bed. In less than a moment's time she was walking through the house. She was screaming. Her mother pitched over in the room, cold fainted.

...Here she run back in the house, set down at the piano. A few moments, her father came from across hill with a little bucket of milk from where their barn was. Coming across, he seen the crowd. He begin to hear the music. He said, "What, we got company? Listen to the people in there." When he walked in the door, there set his only beloved daughter setting there, playing,

Jesus keep me near the cross,
There's a precious fountain,
Free to all, a healing stream,
That flows from Calvary's fountain.

Then setting there, he dropped his bucket, and threw his arms around, and said, "Honey, what is it?"

She said, "That one who you called the reprobate, Lord Jesus has sent him here. He laid his hands on me, and now I am well."

And she is my piano player at the Milltown Baptist church today. Perfectly normal in good health, just as healthy as anybody that's setting in this building tonight. Write to her and find out.